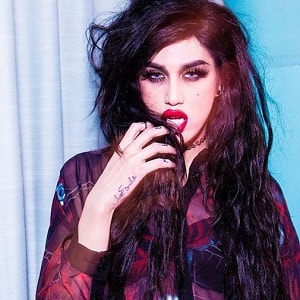 “But I had to wear it because it was see through and I wanted to show my body.”

Adore Delano is a gay which was announced when Adore was 12. Adore identifies as non-binary. His current relationship status is unknown.

Who is Adore Delano?

Adore Delano is a Mexican-American drag queen, singer-songwriter, and television personality. Adore was a contestant on the seventh season of American dol in 2008 and also competed in the sixth season of RuPaul’s Drag Race and made herself recognized and finished in the top three.

Adore was born on September 29, 1989, in Azusa, California. Her birth name is Daniel Anthony Noriega. She is currently 29 years old. She has got a sister named Diamonique and two elder brothers. He holds American and Mexican citizenship but her ethnicity is unknown.

She attended Sierra High School. Other information about her education history is unknown.

She made her way to the semi-finals on the seventh season of American Idol in 2008 and after her performance, Adore was invited by Rosie O’Donnell to perform on her R Family Vacations cruise. Also, she was invited by talk show host Ellen DeGeneres to be guest on her show.

She is also famous as a Youtube start as she performs skits in drag as Adore Deano or Angel Baby. She released the music video ‘24/7’ in which she featured her sister. She was inspired by the performance of contestant Raven in ‘RuPaul’s Drag Race’ and entered the drag competition at the club and later won it.

In December 2013, she became one of the contestants among fourteen drag queens and competed on the sixth season of ‘RuPaul’s Drag Race’ where she finished as joint runner-up to season winner Bianca Del Rio.

On May 20, 2014, she released the single ‘DTF’ from their debut album ‘Till Death Do Us Party’ and the full movie was released on June 3, 2014. The album became number three on the US Dance/Electronic Albums chart, 11 on the Independent Albums chart, and number 59 on the Billboard 200.

She was awarded Drag Queen of the year in 2016. Apart from that, she has not been awarded and nominated fro her work.

She has not disclosed her salary and income so, it is hard to predict her net worth.

Adore filed a lawsuit against former management company, producer Entertainment Group on April 4, 2017, and Adore had earned $2.5 million over the past three years, though only about $300,000 was actually paid. In January 2018, P.E.G. countersued alleging Adore owed the company $180,000 in management fees.