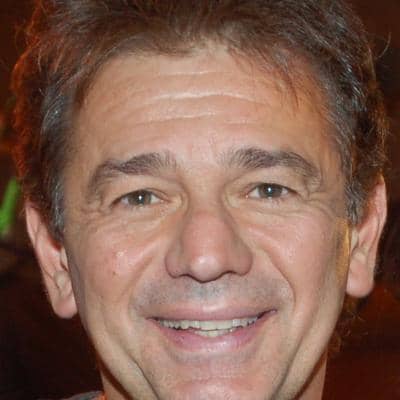 Adrian Zmed has been married three times. He married his high-school girlfriend, Barbara Fitzner, in 1976. The couple had two sons, Zachary and Dylan. Zachary and Dylan are members of the rock band The Janks and Bird Dogs. When the couple divorced is unknown.

On 5th October 2012, Zmed married Lyssa Lynne Baker. He is still married to Lyssa and both live a happy life.

Who is Adrian Zmed?

Adrian Zmed is an American actor, singer, and television personality, best known for his role in “Grease 2” as Nogerelli. He is also known for his work in “Bachelor Party”, and “T.J. Hooker”.

Adrian Zmed was born on 14th March 1954 in Chicago, Illinois, the U.S. As of 2021, Zmed is 67 years old. He is the youngest of three sons of George Zmed and Persida Zmed. His brothers are Walter Zmed and Cornel Zmed. Zmed’s parents were originally from Romania but he was born in America.

Zmed graduated from Lane Tech High School. He used to play American football for the school’s team until he broke his leg bone. After recovery, he played two seasons for New England Patriots.

He quit sports and began acting. After appeared in his high-school produced TV show, Guys and Dolls. He was considered Chicago’s top high school performer.

Zmed has worked in the entertainment industry as an actor, singer, and television personality.

From 1980 to 1990, Zmed appeared in various TV Series and movies like “For the Love of It”, “Goodtime Girls”, “Bosom Buddies”, “Eyewitness to Murder”, and many other.

He also had some of his most noticeable work during this time like “Grease 2”, “Bachelor Party”, and “T.J. Hooker”. During this time he was a very popular TV actor.

He was active during the 90s and 2000 in the acting industry as well. He played in various TV Series and eventually made a few movie appearances as well. Zmed made an appearance in TV Series and Movies such as “The Steve Harvey Show”, “Improper Conduct”, “Caroline in the City”, “Diagnosis Murder”, and “Passions”. He also voiced Toth in the 2002 video game, Star Wars: Jedi Starfighter.

Since 2010, Zmed had not been active in the industry. He has appeared in 4 TV Series and TV Movies, “Outside the Box”, “Lady Dynamite”, “Sharknado 4: The 4th Awakens”, “Mickey Mouse Mixed-Up Adventures”.

His upcoming movie is Spring Break ’83.

Zmed has headlined in a few musical theaters in his life like “Children of Eden”, “Noah”. He has also starred in Broadways such as “Falsettos”, “Blood Brothers”, and ” Grease”. He played Nick in the musical “Surf the Musical” at Planet Hollywood in Las Vegas in 2012.

Although Zmed is a very talented person, he has not received any professional nominations or awards in his career.

Zmed is a very successful entertainer so, it is fair to assume he is rich. According to various sources on the internet, Zmed has an estimated net worth of $3 million. Information about his salary and assets is not available on the internet.

Zmed is 5 feet and 8 inches tall and weighs around 70 kg. Zmed has grey hair and hazel eyes.