Updated On October 12, 2022 | Published By: Gracie Hale | In Pregnant , Relationship
Share this 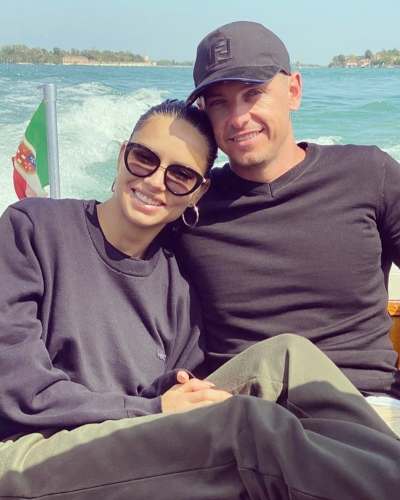 The Supermodel, Adriana Lima is pregnant!

The 40-years-old former Victoria’s Angel is expanding her family with boyfriend Andre Lemmers. This will be the first child with her new boyfriend.

She is already a mom to two daughters, Valentina, 12, and Sienna, 9, whom she shares with ex-husband Marko Jaric.

On Friday, Lima made her TikTok debut with a sweet pregnancy reveal. She posted a montage video that begins with some short clip of Lemmers surprising her as she wrote,

“Andre likes to scare me … but today is payback!”.

Lima then showed the pregnancy test to Lemmers which makes the producer visibly shocked. Similarly, she ended the video with a recording of ultrasound and captioned it “Coming Fall 2022”. The model featured Jackie Wilson’s “Your Love Keeps Lifting Me (Higher and Higher)” soundtrack over the video.

Who is Andre Lemmers?

Andre keeps a quite low-key profile. He doesn’t active on social media platforms like Instagram, Twitter, and Facebook. According to his Linkedin profile, he is a creative executive and producer. He has been working for the Hollywood GAnd Production since 2016.

In 2020, he became a partner in the same company where he has been employed. He served as the CEO of MiLu Entertainment for 7 years. Some of his notable projects are Gods of Accident, Rock Paper Scissors, The Thicket, Aleppo, White Devil, and Phantom of Belgrade.

Further, Lemmers hails from Los Angeles, California, and currently resides in Santa Monica. His birthday falls on the 22nd of June. As of 2022, he is 40 years old, the same age as his GF Adriana.

Adriana made her Tiktok debut on the 18th of February this year. She also shared the news on Friday on her respective Instagram account.

“I am officially on TikTok! Go check my first video! Get ready for a big surprise!”

However, the posts have been deleted. Her new Tiktok id has already been verified within two days of launch. She has amassed over 36.4k followers to date.

Shortly after, love blossomed between Kravitz and Adriana and was spotted together on numerous occasions and events including Paris Fashion Week.

In 2002, Adrina also briefly appeared in the music video of Kravitz’s song “Yesterday Is Gone”. The same year, the two announced their engagement but less than a year after the proposal they broke up.

Afterward, Lima dated Prince Wenzeslaus of Liechtenstein. The two were first spotted together dining in Rome in 2003. After that, they often caught up together side by side in other public events in the US and Europe.

In 2005, Lima created a scene outside a New York bar when she slapped Prince on the face. The scandalous moment was caught by the paparazzi which create a huge buzz in the media.

As per reported the couple reconciled that same night and went home together. Nevertheless, they didn’t see together again after the year 2006.

Similarly, there were rumors between Lima and Derek Jeter about being romantically linked but they never officially admitted to be dating.

Lima then dated the former basketball player Marko Jaric in late 2007. The following year, Jaric’s popped the question to Lima on her birthday.

After nearly three years of dating, the pair walked down the aisle on 2009’s Valentine’s Day in an intimate wedding ceremony in Wyoming, USA.

Prior to their wedding, the two had already welcomed their first daughter, Valentina on the 12th of November 2006. She then gave birth to her second child Sienna on 12 September 2012.

Further, she is rumored to be dating then 20-years-old singer Justin Bieber. Presently, she is enjoying a blissful relationship with the producer, Andre Lemmers. Also, they were welcoming a new member of the family in the fall of 2022.

Adriana Lima is a Brazilian actress and model who is best known as Victoria’s Secret Angel since 2000. She was also the spokesmodel for Maybelline cosmetics from 2003 to 2010.

Lima is also widely recognized for her involvement in the Super Bowl and Kia Motors commercials. She is currently the brand ambassador for the clothing brand ‘Desigual’. See more…