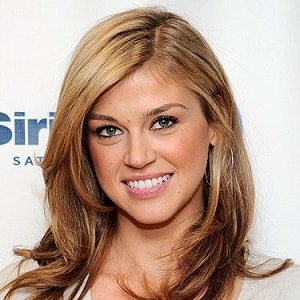 “I love a sandwich that you can barely fit in your mouth because there's so much stuff on it. The bread should not be the main thing on a sandwich.”

Adrianne Palicki is currently married. She exchanged vows with an actor Scott Grimes on 19 May 2019. However, only after two months of marriage, she filed for the separation.

The beautiful actress was previously engaged to her boyfriend, Jackson Spidell on September 10, 2014. They met the very first time on the set of movie ‘John Wick’ in early 2014.

But, in 2015, she revealed that she has parted away from him and ended their engagement. The reason for their separation is still in shade.

Also, Adrianne also dated D.J. Cotrona from 2011 to 2013. The reason behind their separation is still a mystery.

Who is Adrianne Palicki?

Adrianne Palicki is an American actress. She is famous for her roles as Tyra Collette on the NBC series ‘Friday Night Lights’ from 2006 to 2011.

She was born on May 6, 1983, in Toledo, Ohio, USA. Her birth name is Adrianne Lee Palicki. Her father’s name is Jeffrey Arthur Palicki and her mother’s name is Nancy Lee. She has got a brother named Eric who is a comic book writer and influenced her interest in comics.

Adrianne holds American citizenship and her descent is a mix of Polish and French. She has been suffering from Celiac Disease for a long period of time.

She attended Whitmer High School and graduated from there in 2001. Adrianne was one of the brilliant students in her class.

After the completion of her education, Adrianne Palicki presented herself within The WB pilot Aquaman in which she portrayed the character of evil Naida. The role was highly appreciated by many of her fans. After that role, she started her official career.

She appeared as Whitney Addison in the film ‘Popstar’ in 2005 and was a  series regular on the first three seasons of the series ‘Friday Night Lights’(2006-2009). She played the character, Tyra Collette, in the series and returned for the final two episodes of the series in early 2011.

Adrianne appeared in the will.i.am music video ‘We Are the Ones’ in 2008 and joined the FOX television drama ‘Lone Star’ in 2012 but the show was canceled after two episodes.

She portrayed the role of Wonder Woman in a 2011 pilot for NBC which was produced by David E. Kelley. Adrianne played in season one of the sitcom ‘About a Boy’ as the character Dr. Samantha Lake in 2014.

She appeared as the lead female role of Lady Jaye in ‘G.I. Joe. Retaliation’ in 2013 and appeared in a supporting role in ‘John Wick’ in 2014.

Later, she was cast as a recurring role as Barbara ‘Bobbi’ Morse in ‘Agents of S.H.I.E.L.D. in August 2014 and became one of the main cast after the midseason break of season 2. Later in July 2016, she played the character of Kelly Grayson in ‘The Orville’ which is a  science fiction comedy-drama series.

She along with her brother, Eric wrote their first comic book, ‘No Angel’ in 2016 which was published by Black Mask Studios.

She has accumulated a net worth of around $4 million and she has gathered that sum of money from her professional career. However, her salary and income are under review.

Adrianne and actor Scott Grimes are rumored to be dating each other. They were spotted holding hands in the Comic-Con party on July 21, 2018. They have been co-starring in the TV series ‘The Orville’ since 2017.

Neither of them has officially declared their relationship status.

Adrianne Palicki has a height of 5 ft. 11 inches and she weighs 59kg. Also, Adrianne has got blue eyes and blonde hair. Her body measurement is 36-25-34 inches.