Pro-boxer Adrien Broner is married and a father of five. 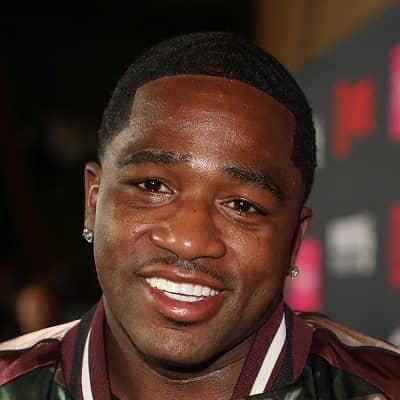 Adrien Broner is a married man. He is married to Arie Nicole. However, Arie keeps a low profile and doesn’t come up much on public appearances so, the details regarding his wife are unknown at the moment.

After their engagement in the year 2015, the couple tied the knot but the exact date of their marriage is also unknown. As per sources, Broner spent around $137,000 on an engagement ring for his wife.

He is the father of five children named Adrien Broner Jr, Na’Riya Broner, Admire Broner, KJ Broner, and Armani Broner. Currently, he resides in Cincinnati, Ohio, USA with his wife and children.

Who is Adrien Broner?

Adrien Broner is an American professional boxer. The boxer is best known for his fascinating boxing skill in that his hard-left body shot and lighting quick right uppercut.

The boxer was born on July 28, 1989, as Adrien Jerome Broner. He hails from Cincinnati, Ohio, U.S. The nationality of Adrien is American and belongs to the All-American ethnicity.

The name of his parents is Thomas Knight (Father) and Dorothy Broner (Mother).  Adrien has also a twin brother named Andre Broner. Furthermore, his academics background hasn’t yet been disclosed in the media.

Adrien started boxing from the age of six and turned professional at the age of 19. On May 31, 2008, he made his three consecutive first-round knockouts against Davis, David Warren Huffman, and Ramon Flores.

In his fourth fight, he has gone against Terrance Jett at the MGM Grand in Las Vegas where he won the fight in the sixth round with stoppage and ended the year with a no-contest decision against Erick Ricker.

He defeated Allante Davis via knock-out in the first round in June 2010. In the same month, he got the title of WBC Youth Intercontinental super featherweight after defeating Puerto Rico’s Carlos Claudio. That year, he had played against Rafael Lora and Guillermo Sanchez won against both.

Likely, his second loss came against Shawn Porter in June 2015. Unfortunately, Broner took a sudden retirement in 2019 after a month of his loss to the renowned boxer, Manny Pacquiao.

– He defeated Vicente Martin Rodriguez through knockout in the third round at 130-pound Championship.

– In November, he defeated Antonio DeMarco  who is popularly known as Ring No1 in the Lightweight division at 135-pound Championship

– In March, he went against one of the strongest boxers of the league, Paulie Malignaggi at the 147-pound Championship where he won the title with his power punches comfortably.

– Broner again won the title of WBA light-welterweight at 140 ponds in October 2015 against Khabib Allzkverdiev by TKO in the 12th round.

In his career, he has also undergone a number of legal issues such as he was charged with a misdemeanor after allegedly choking a waitress at a nightclub in 2016. He was jailed for contempt of court after he failed to pay a financial judgment in 2017.

In January 2019, Broner got personal at his press conference and refused to take questions from a specific boxing commentator. Lately, he was arrested in Miami for DUI in March 2020.

As of 2020, Adrine has an estimated net worth of around $6 million throughout his profession as a professional boxer. Taking about his earning, he earned a guaranteed $ 1 million on April 21, 2018 fight against Jessie Vargas. In January 2019, he fights against Manny Pacquiao and earned a guaranteed $2.5 million before pay-per-view bonuses.

In addition, he earns through various endorsements and sponsorships. He promotes the brands such as FashionNova, Famous Jewelry company Avianne, and so on. He has also a $6 million mansion that he had toured to fans in 2016 via Snapchat.

As of professional boxer, Adrien has an impressive body with dark complexions. He stands at the height of 5 feet 6 inches tall and his weight is around 69 kg. He has black hair color with dark brown pair of eyes.

Adrien has a verified Twitter account with more than 250.4k followers. He has also shared his email id [email protected] for any business inquiries. As of now, it seems he has deactivated his Instagram.

In earlier, he was active on Instagram under the username @adrienbroner where he has more than 1.1m followers.