Actor Adrienne Frantz is married and a mother of one.

Talking about relationship status, Adrienne Frantz is happily living a married life with Scott Bailey. Scott is a well-named American actress who is famed for his role as Sandy Foster on the CBS soap opera Guiding Light.

The couple engaged in January 2010. They took their relationship to next level after tieing the knot on 11 November 2011 in California. The couple welcomed their first child. Amelie Irene Bailey on 1 December 2015.

As per different sources, it is known that she had two miscarriages in October 2013 and December 2014.

Previously, Frantz was in a long-term relationship with Johny Rzeznik. John is a famous American musician, singer, songwriter, and producer. Adrienne has released her Halfway on her new album which is about him. 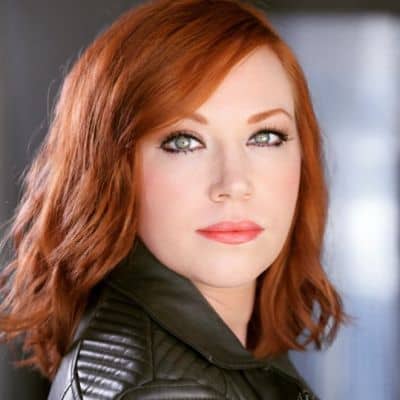 Who is Adrienne Frantz?

Adrienne Danielle Frantz is a well-recognized American actress and singer-songwriter. Frantz is best famed for her appearance as Amber Moore in The Bold and the Beautiful (1997-2012), and The Young and the Restless(2006-2010, 2013).

Moreover, she has performed many of her own songs on The Bold and the Beautiful and on the Jimmy Zip soundtrack.

Adrienne Frantz was born on 7 June 1978. At present, her age is 42 years old. Likewise, her birthplace is Mount Clemens, Michigan, the USA.

Adrienne is the daughter of her father, John Frantz whereas her mother is Vicki Frantz. Professionally, her dad is a psychologist and her mom is a chef. However, her parents got separated when she was just 12 years old.

Talking about her nationality, Frantz holds an American identity whereas her ethnicity is Caucasian.

Regarding education, the actress studied her higher education in Medford NJ for her Junior and Senior years. Later, she studied at Fordham University Marymount.

Professionally, Adrienne Frantz debuted in the soap opera genre in 1997 as Tiffany Throne on Sunset Beach. She quit the show later that year due to her appearance as the villainess turned sympathetic heroine Amber on The Bold and the Beautiful. Due to her appearance, Frantz bagged a Daytime Emmy in the Outstanding Younger Actress category.

Well-named actress, Adrienne made a remarkable return to The Bold and the Beautiful on 1 July 2010 portraying the role of Amber and playing it until 2012. Apart from these, she has made a guest presence as a popstar titled Emica in the 2001 Rugrats episode, “All Grew Up”.

Similarly, Frantz also performed Claire Redfield in a commercial for Resident Evil 2. She has also guest featured in an episode of That ’70s Show. Afterward, she emerged in Ed: Gein: The Butcher of Plainfield.

Adrienne has earned handsome income from her profession in the acting industry working as an actress as well as a singer-songwriter. She has been active in her profession from 1997 till the present.

It is reported that Adrienne Frantz has an estimated net worth of $2 million as of 2022.

Talented star, Adrienne has never been part of any controversial matter or rumors till now.

It seems that Frantz prefers enjoying her personal life and does not want to merge it with her professional life.

42 years old actress, Adrienne Frantz has gorgeous looks as well as a charming personality. She stands at a height of 5 feet 3 inches. Also, she has a balanced body weight of 50 kg.

Furthermore, Frantz has blue eyes whereas her hair is blonde.

Nevertheless, the popular star has never mentioned other physical details in the public yet.

About her social media presence, Adrienne Frantz is an active personality on social media. Adrienne has more than 22.4k followers on her official Instagram account @adriennefrantz.

She is also active on Twitter with around 18.4k followers.

Moreover, Frantz is also available on Facebook with nearly 1.8k fans and supporters.