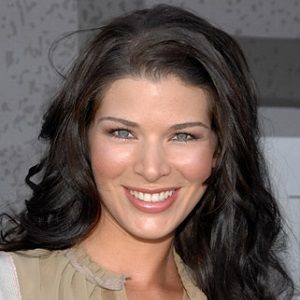 Adrienne is married to Bud Brutsman, a video producer, and television producer. The couple tied the knot on June 9, 1998. And it had become a long time since they are together. The couple also has a son born in 2010. Now different rumors are spread about the couple that they are separating but the exact information is not yet found.

Adrienne is popularly known as an American actress and television host. She has received good remarks from her roles in different movies. Moreover, she has also built a career in the modeling field but has received more popularity working as a host and actress.

Adrienne was born on 25 of July 1974 in Whittier, California, United States of America. She was born in a different ethnically family as her father is from Yugoslavia and her mother is from Mexico. She grew up with her parents.

She was very much interested in the acting field from a young age. She was a natural entertainer. She performed different acts and danced on a stage when she was just six years old. She was very passionate about performing throughout her school days and aimed to be a successful actress.

Janic, after completing her schooling graduated in the year 1992. She graduated from Pioneer High School, Whittier, California.

After her graduation, she started to work as a television host. Then in reality-television series of TLC’s Overhaulin, she worked as a co-host.  Then she became the host of Hot Import Nights in the year 2008. Adrienne has worked as hosts in different shows on E! Entertainment. She then got the chance to work as host of Music Café. Before it, she has joined Overhaulin’ on TLC as a co-host.

Janic has also worked as one of the Fantanas as a promotional model for Fontana soda. She started her modeling career after that and models for the promotion of soft drink Fanta for almost two years from the year 2004 to the year 2006. She has also worked with Tinker Keck as a co-host of an infomercial in the year 2009.

Furthermore, she has appeared in several films.

Though the actress has performed in various kind of movies and has received good remarks. But she hasn’t received any awards yet.

Adrienne Janic: Salary and Net Worth

She is married to Bud Brutsman, who is a video producer, and television producer. The combined net worth of Janice and Bud is estimated to be around $ 20 million. Whilst her personal net worth is unknown.

She has maintained a good relationship with all of the other people in her personal and professional work and so wasn’t involved in any of the rumors and controversies.

Adrienne has maintained a good body standing with a height of five feet and eight inches. And she has blue colored eyes likewise, brown colored hair. Talking about her weight she weighs  57kg. Her body measurement is 32-24-33 inches. Her shoe size is 8.5.