Adrienne Maloof is a producer of an American reality show, Kardashians and The Real Housewives of Beverly Hills. She is also a shoe designer. Adrienne was previously married. 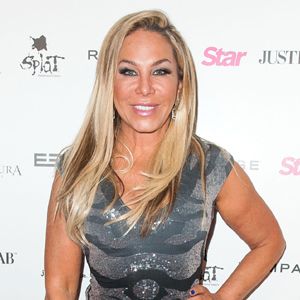 When I find a fashion formula I love, I tend to stick to it. There's nothing wrong with wearing a look over and over again, if it suits you and makes you feel great.

Adrienne Maloof is in a relationship with her ex-boyfriend, Jacob Busch.

She is married twice in her life. Her first marriage was with Steve Marks Jr. in 1993.

Her relationship did not work well and the couple separated in less than a year and after being single for 8 years she got married to Dr. Paul Nassif, who is a plastic surgeon. The couple had a romantic relationship after marriage.

The couple has three children together Gavin Nassif and later twins Colin and Christian Nassif. The married just worked for a decade and later in 2012, they got divorced.

Soon after her divorce, Adrienne was in a relationship with Sean Stewart, son of Rod Stewart a British Rocker who is 19 years young to her.

Who is Adrienne Maloof?

Adrienne Maloof is a renowned businesswoman and co-owns Maloof Companies. Apart from it, she is a shoe designer and television personality.

She is also a producer of Kardashian and The Real Housewives of Beverly Hills.

The tremendous personality was born on September 4, 1961, in Albuquerque, New Mexico, U.S.A. Maloof holds an American nationality and belongs to Lebanese and Irish ancestry.

Her father is a billionaire entrepreneur named George J. Maloof Sr. and the mother‘s name is Colleen. She is the only daughter of three siblings Gerorge J. Maloof Jr., Joe Maloof and Phil Maloof.

There is no information regarding her schooling. She did her degree in political science from the University of New Mexico. Adrienne got a full scholarship because of her talent in tennis. She was also a member of Pi Beta Phi Sorority.

Adrienne Maloof joined the family business after completing her education as a part of the marketing and promotion department. Later she grew her interest to manage all Maloof companies and controller much marketing operations.

Maloof is involved in many projects like film production and produced horror film Feast. She also appeared in Real Housewives of Beverly Hills later left the series in 2011.  She also introduced a shoe collection by Charles Jourdan.

Adrienne Maloof Camp Kindness Program was founded by her to teach underprivileged youth about proper care of animals. She also supported many other organizations.

She has accumulated a net worth of $60 million. But there is no information regarding her salary.

Seeing her performance in her field we can assume that she earns a good salary. Her income in The Real Housewives per season is $200,000.

Brandi Glanville told the personal secret to media about Adrienne Maloof that she was angry and there is a legal battle going between the pair.

Adrienne used a surrogate to have her twins, Christian and Colin, which was revealed in 2013. Later, she said that her last pregnancy was complicated, hence she did surrogacy.

Moving towards her body measurements, Adrienne Maloof has a good height of 5 feet 1 inch and weighs 53kg. She has a well-shaped body with 34-26-32 inches.

She has Dyed blonde hair and light brown eyes. Her dress size is 6 and the shoe size is 9.