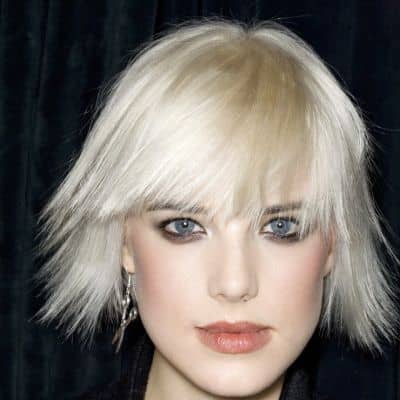 Modelling is only about the look. In acting, it's the feel that matters.

Who is Agyness Deyn is married?

Agyness Deyn is married to Joel McAndrew, a Hedge Fund Manager. The couple married in 2016, August in New York.

Agyness Deyn was pre-married to Giovanni Ribisi, an American actor. The couple married in 2012. After 3 years of marriage, the couple end up divorcing in 2015.

Agness dated Albert Hammond Jr, a Musician of The Strokes band in the 2000s.

Besides that, she has dated Alex Greenwald, an American musician, and actor in Phantom Planet Band.

Who is Agyness Deyn?

She made her appearance in Marielle Hell in Her Smell (Drama Music) in 2018.

Agyness was born on 16th February 1983 in Little borough, Greater Manchester, England. Her full name is Laura Michelle Hollins. She is the daughter of Ken Hollins Agyness and Lorraine Deyn Agyness.

Besides that, she has one brother Greg Hollins and one sister Emily Deyn. Moreover, Deyn holds British nationality with Caucasian ethnicity.

Moving towards her educational background, she attended All Saints Roman Catholic High School. Later, she studied at Bacup and Rawtenstall Grammar School and Sixth Form, Waterfoot.

Deyn was cast as Flo in Pusher (Crime Thriller) in 2012. In the same year, she made her appearance
in Here (Short). Agyness played the role of Lily O’ Connor in Electricity (Drama) in 2014.

Moreover, she portrayed the role of Chris Guthrie in Sunset Song (Drama) in 2015. In the following year,
she played the role of Woman in Cab in Hail, Caesar! (Mystery Drama).

Furthermore, Agyness made her appearance as DI ElaineRenko in Hard Sun (TV Mini-Series) in 2018. Similarly, in the same year, she was seen in many Tv Movies such as The Titan, Patient Zero, and Her Smell. In 2019, she made her self appearance as a Model in Burberry: Spring/Summer 2020 at London Fashion Week.

As of 2022, Agyness has a net worth of $5 million. Meanwhile, her salary and income are still unavailable. Furthermore, Deyn is living her life lavishly and luxuriously.

There is a rumor that Agyness is lying about her age. Meanwhile, she admitted in an interview with The Guardian about her age. Besides that, Deyn has been able to maintain her image among the public and the media.

Agyness stands at the height of 5 feet 8 inches with a 54kg weight. Talking about her physical appearance she has blue eyes with naturally short blonde hair.