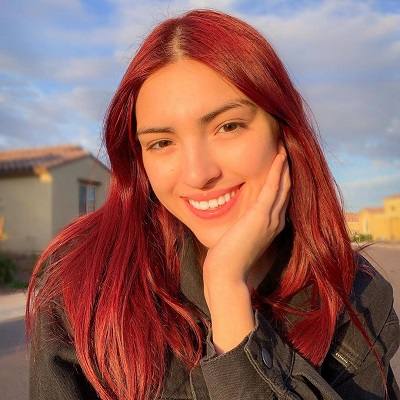 Ahlyssa Marie’s current relationship status is possibly single. As of now, there is no information about her previous relationship.

As of now, she is focused on her career. Her Instagram posts suggest that she loves to be clicked perfectly.

American Ahlyssa Marie is Social Media Influencer and Tik Tok Star. She is renowned for dancing and singing videos in TikTok that went viral on the web.

She is also a member of Club House Next.

Ahlyssa Marie was born as Ahlyssa Marie Velasquez on the 22nd of April 2001 in Arizona, United States. She is of Spanish ethnicity.

As of now, she has not revealed any details regarding her mother and father.

Recently, in 2019, she graduated from High School. As of now, she is an alumna of the University of Arizona. She is a student of criminology of the university.

While growing up, she was always passionate about dancing and singing. During High Schooldays, she also joined the local theatre too.

Marie was also passionate about dance and song TikTok became a good platform for her to showcase her talent. In 2019, she started uploading videos in the TikTok.

The very first video that she uploaded was made in her working hours when she was bored. In an unexpected manner, the video went viral with around 815.3k views and 100.4k likes. That views in the video inspired her to make such videos.

With the increasing number of videos, her popularity in the app is also in an increasing manner. As of now, she has 2.9 million followers on the app with 116.9 million likes. In the course of making videos, she has collaborated with TikTok stars like Zoe LaVerne, Oliver Moy, and  Sebastian Moy.

Besides TikTok, she is expending her career as a YouTuber too. She created a self-titled channel on the 10th of April 2017. However, she is starting to upload videos recently.

As of now, the channel has 38.4k subscribers with 85.3k views. Besides that, she is a member of the social influencer group, Club House Next along with Michelle Wozniak, Jessica Belkin, Dylon Shogo, Rad Shogo. Along with them, she makes YouTube videos too.

Through her career as a TikTok star, she has made a net worth of $300k.

As of now, she has not been through any sort of controversy that created a buzz in the media. Similar goes with the rumors too.

Ahlyssa Marie has brown eyes with dyed red hair. She stands at a height of 5 feet 7 inches and weighs around 58 kg. Her body measurement is 36-28-36 inches.

She has a YouTube channel, Clubhouse Next with 3.08k subscribers with 12.8k views.