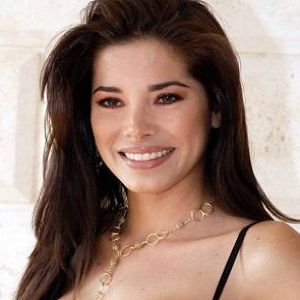 I have been in a couple of music videos and I truly enjoyed being a part of them.

It’s not easy, but I try to give my son my undivided attention. When he is in school I get my work out in and get to catch up on work.

In a way, Italians and Venezuelans are similar. We are very family oriented and love to eat good food. I have been influenced by language, style, and way of life . I lived in Italy for 13 years so the Italian culture plays a big role in my life.

What is the relationship of Aida Yespica?

Yespica was in a relationship with fellow contestant Francesco Facchinetti whom she met in a TV reality show L’isola dei Famosi 2 in 2004 which ended in 2006.

From 2007 to 2009, she has media been gossiped about Italy where she has been in a romantic relationship with footballer Matteo Ferrari. She has a son, Aron Ferrari with Matteo. After the birth of a son, Matteo let her in 2009.

Now she is in a serious relationship with Roger Jenkins who is a banker and a British Business Professional before ending her marriage with Leonardo Gonzales on 2013.

Aida Yespica is a Venezuelan model, actress, and TV personality. She is famous for her participation in Miss Amazonas as a big favorite to win that contestant.

Furthermore, she is known for gracing the nude calendars for FOX, GQ, Riello, and many others.

Aida Yespica was born on 15 July 1982 in Barquisimeto, Venezuela. She is of Venezuelan nationality. Furthermore, there is no information regarding her parents and education.

Aida Yespica’s career began when he entered in Miss Venezuela beauty pageant in 2002 as a big favorite to win the contest among the media although she didn’t win.

After this, she moved to Italy to pursue her modeling career and went to grace many magazines including GQ, Maxim, Max, and Fox.

She has earned a lot with her modeling, acting, and TV shows. Of all her earnings she has an estimated net worth of $8 million as of 2022.

There were rumors that she was the main cause of the transfer of Football star Mesut Ozil from Real Madrid To Arsenal in 2013. Every few weeks Ozil spent $23000 for a private plane to reach out to Yespica in Milan.

According to Real Madrid’s President, the romantic obsessions exhausted him which was seen in his game that led to his transfer from Real Madrid to Arsenal for 50 million euros. However, all these accusations were denied by Yespica.

Also Read: Biography of Garbiñe Muguruza and know her ethnicity, relationship, body measurements, and many more.

Aida Yespica is 5ft 8 inches tall with a beautiful body of 35-25-35 inches measurement and weighs around 55kg.

She has dark brown hair and attractive hazel color eyes. She fits in 4 US dress sizes and a 34C bra size.

Also get to know more about the birth facts, education, career, net worth, rumors, height, and social media of different personalities like Ali Landry, Andrea Espada, and Jackie Sandler.