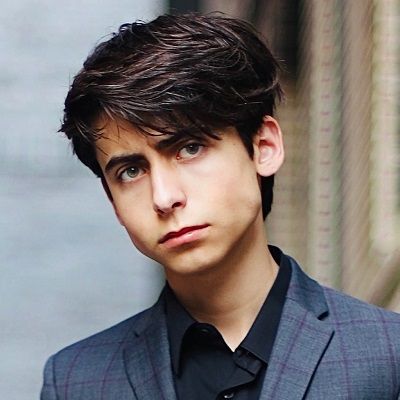 What is the relationship of Aidan Gallagher?

Aidan Gallagher is 16 years old and is currently single.

According to some sites, he was previously dating Hannah McCloud. Hannah is also an actress.

Aidan is a vegan and is active as an environmental advocate. He enjoys playing the guitar.

Who is Aidan Gallagher?

Aidan Gallagher is an American actor known for portraying the role of Nicky Harper in the Nickelodeon television series Nicky, Ricky, Dicky & Dawn. Aidan is also a singer and songwriter.

He was nominated for Young Artist Awards for Outstanding Young Ensemble Cast in a Television Series in Nicky, Ricky, Dicky & Dawn.

Since 2019, he is working on the Netflix series The Umbrella Academy as Number Five.

Aidan Gallagher was born on 18th September 2003 in Los Angeles, CA. He featured his parents on Instagram previously. His father is from the Hollywood industry.

When he was young he showed interest and talent in creative writing and art. When he was 8 years old, he was storyboarding and shooting live-action shorts with his friends and slow-motion Lego action videos with special effects.

His father brought him to set and his friends found Aidan appealing so they asked him if they could write him into their projects.

He started appearing on TV at the age of 9.

Aidan started acting from the 2013 TV series Modern Family as Alec. After that, he appeared in You & Me, Jacked Up, We Make That Lemonade, Nickelodeon’s Ho Ho Holiday Special, Nickelodeon’s Sizzling Summer Camp Special, and others.

From 2014-2018, he appeared as Nicky Harper in Nickelodeon’s Nicky, Ricky, Dicky & Dawn. He played the role of Nicky for four seasons. However, the series ended in 2018.

In 2017, he started working for the role of Number Five in the Netflix series The Umbrella Academy. It released in February 2019.

At present, Aidan is recording his first solo album. He planned a world tour following the release between seasons of The Umbrella Academy.

Also, he is a talented singer, songwriter, guitarist, and piano player. He is also a composer and producer.

Aidan is active in environmental issues. He serves as a youth advocate for a number of environmental organizations like Waterkeeper Alliance, WildAid, and Oceanic Preservation Society.

In September 2018, he was asked to give a speech at the Global Climate Summit for Governor Jerry Brown of the United States in San Francisco. He represented the youth of the world.

From his YouTube channel, he makes an average earning of $9.5k US.

Aidan has dark hair and light blue eyes. He is 5 feet 6 inches tall. He has a weight of 69 kg.

Aidan Gallagher has around 6.7 million followers on Instagram. He has followed popular accounts like Joshua Rush, Anais Gallagher, Jade Pettyjohn, Charlie Puth, and others.

Aidan has a YouTube channel named ‘AidanRGallagher’ where he uploads his songs. He has 2.73 million subscribers on his channel.