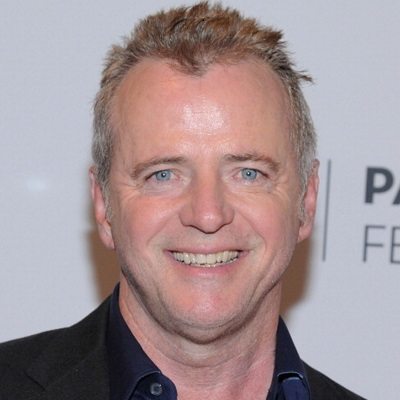 Life is hard for everyone. That's why there's such a nice reward at the end of it.

You should learn to be happy with what you have. Besides, the fact that I'm not a huge star has allowed me to pick and choose the roles I want to do, not the ones some person sitting in a studio office thinks I should do.

Some actors actually think about what they're going to talk about during the interview - they read up and meditate and plan quotes and get all inspired. It's very smart, but it's so planned. I never think to do that.

What is the relationship of Aidan Quinn?

Aidan Quinn is happily married to Elizabeth Bracco. His wife, Elizabeth is an actress renowned as Marie Spatafore of the HBO’s series, The Sopranos.

After dating for some time, they got married in 1987. Ever since they are leading a happily married life with each other. Together, the couple is blessed with two daughters; Ava Eileen Quinn and Mia Quinn.

Who is Aidan Quinn?

Aidan Quinn is a 2X Primetime Emmy-nominated actor. He is renowned for portraying innocent and intelligent characters like Benny Pearl in Benny & Joon and Gary Hallet in Practical Magic.

As of now, his upcoming movie, Spiked is in the phase of post-production. Also, his movie, Butterfly in the Typewriter is in pre-production. In the movie, he will be appearing as Barnet Rosset.

Aidan Quinn was born on 8th March 1959 in Chicago, Illinois, the United States in a Catholic family. He is of Irish ethnicity.

His mother, Teresa Quinn was a bookkeeper by profession. Also, she used to work in the travel business. Whereas his father, Michael Quinn was an English professor.

He has four siblings including three brothers and a sister. His elder brother, Declan Quinn is 3X Independent Spirit Award-winning Cinematographer. His younger sister, Marian is an actress. She is popular as Alice Murray in the movie 32A.

Moving toward his academics, he parted his High School education in Ireland and Rockford, Illinois where he was raised along with his siblings. Later, he moved to Dublin in his teen days to join the Piven Theater Workshop.

Aidan Quinn started his career through theater plays. Also, he featured in a number of productions and local companies. Later, he made New York off-Bradway production with the play, Fool For Love.

In 1989, he made his acting debut with the movie, Reckless. In the movie, he portrayed the character of an angry young man, Johnny Rourke. The following year, he appeared in the movie, Desperately Seeking Susan as Dez who was a groundbreaking character in his acting career.

The same year, he featured in the TV movie, An Early Frost playing the character of a young gay lawyer who died of AIDS. For the character, he received his first Primetime Emmy Nomination. After the movie, he never looked back. Some of his movies after that along with the year and his character name is-

Besides movies, he is equally popular for his appearance in TV series. In 2004, he made his TV debut with the series, Third Watch in the character of Lieutenant and captain, John Miller.

Following that, he appeared in TV series including The Book of Daniel, Canterbury’s Law, and Elementary.

How much is the net worth of Aidan Quinn?

How tall is Aidan Quinn?

Aidan Quinn has blue eyes with auburn hair. He stands at a height of 6 feet and weighs around 80 kg.