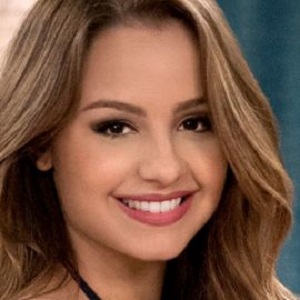 Aimee Carrero is a married woman who has been married to American actor, Tim Rock since August 20, 2016. Her husband is famous for his role in ‘Lighting Face’, ‘Children of the Corn: Genesis’ and ‘Ticky Tacky’. The duo got engaged in November 2015 and they have not shared any children till date. The couple seems to be spending their married life happily as there is no sign of divorce between them.

Who is Aimee Carrero?

Aimee Carrero is a Dominican-American actress and she is best known for her role as Angie on the Cartoon Network series ‘Level Up’. She is also well recognized for her voice of the titular character She-Ra in the Netflix series ‘Sha-Ra and the Princess of Power’.

Carrero holds American citizenship but her ethnicity is a mix of Dominican and Puerto Rican.

She debuted her acting carer from the film ‘Category 4’ which was released in 2007. She portrayed the character Alexandra in the film. In the same year, she portrayed the role of Eva Storhei in the short film ‘The Essential Man’. After two years, she appeared as Emily in the film ‘Alvin and the Chipmunks: The Squeakquel’.

In addition, she appeared as Angie in the film ‘Level Up’ in 2011 and appeared in American comedy series ‘Hannah Montana’ in 2009 alongside Miley Cyrus, Emily Osment, Jason Earles, and many other stars.

She made her Off-Broadway debut from the play ‘What Rhymes with America’ in December 2012. After two years, she co-starred in the horror film ‘Devil’s Due’ in which he portrayed the character, Emily. Her other notable film roles include Miranda in ‘The Last Witch Hunter’ in 2015, Patti Dragonetti in ‘The Portuguese Kid’ in 2018 and Maritza in the short film ‘Dylan’ in 2018.

She has been portraying the character of Princess Elena in ‘Elena and the Secret of Avalor’ since 2016 and as Adora/ She-Ra in ‘She-Ra and the Princess of Power’ since 2018.

It seems the talented actress has not been awarded and nominated for her work till date. Hope, she will win in the coming future as there is still a long way to go.

Her exact net worth, salary, and income is unknown however, the total net worth of her with her husband is around $65 million according to the sources.

The beautiful and talented actress has maintained her celebrity lifestyle and has not harmed anyone in her career. So, there is no rumor and controversies about her neither in her personal life nor in her private life.