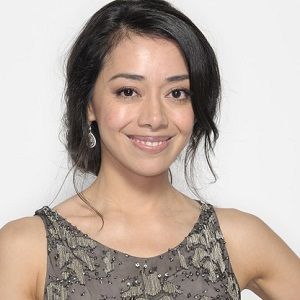 It's so exciting to headline a film. It's not every day you see a Latina carrying a full-length feature.

Latinos are the fastest growing minority, and we're obviously not going anywhere. We're extremely loyal as a people, and I think Hollywood is starting to recognize that. It's very rare for a major studio to nationally distribute a film with Latino talent, not only in front of the camera, but also behind the camera.

Education equals choices. I have been blessed with the choice to be anything I ever wanted to be, and I truly owe my happiness to my family and education.

As per Garcia’s, current relationship status, she is possibly single. However, as per her past relationship, she was dating the footballer, Anthony Cook. The couples seemed to be in the profound relationship as they were often seen hanging out and enjoying together. Once she was also seen in a jewelry shop in search of a ring, but later she slammed as the news being bogus and not thinking of getting married. The actress broke up with the Cook and is currently single based on her current relationship status.

Her celebrity crush is Joseph Gordon-Levitt.

Who is Aimee Garcia?

An American actress, Aimee Garcia is famous for playing the role in top-rated television series like George Lopez, Vegas, and Dexter. In addition, the actress is also known for her exceptional acting in the movies like Spanglish (2004) and Major Movie Star (2008).

Garcia was born on 28 November 1978 in Chicago, the United States to Puerto Rican father from San Juan and Mexican mother from Pachuca, Hidalgo.

The actress made her stage debut at the early age of 7 from the Paul Mejia’s Cinderella. Her popularity was overwhelmed by the time she reached 12, as she got to play and dance in many shows. In her childhood, she enrolled at the Young people’s company.

Following the completion, she later joined and graduated from Northwestern University. Garcia did her major in French, Economics, and Journalism. While in the university days, she made a 2yrs contract with Paramount Television to play the role in A Chorus Line as ‘Diana Morales’.

Later moving off from the university, she went to Los Angeles to craft a television career. During that period she got cast on The WB’s Greetings from Tucson as Maria. Thereafter, she appeared as Aleph in Global Frequency. She also enjoyed the continuous success as she was cast in George Lopez as ‘Veronica Palmero’.

In 2002, she was offered a role in the Disney movie ‘Cadet Kelly’ and also as a co-star in the WB sitcom, ‘All about the Andersons’. Years after, in 2006, she made a comeback on the series ‘George Lopez’. Following year, she played in the movie ‘D-War’ and in the medical drama Trauma from 2009-2010.

Garcia then spent playing the role of Jamie Batista three years on the series ‘Dexter’. The movie also earned her a nomination for the ‘SAG(Screen Actors Guild) Award’. She has also been nominated for ALMA Awards for the Outstanding Supporting actress.

The actress with her career mainly in the television has an accumulated net worth $2 million.

While her career is going successfully in a full swing, and till date, no detrimental controversies have circulated about her. Apart from her breakup news with the Cook, everything about her is projected positively in the news. Rumors were that Aimee would be cast as the love interest of Tom Ellis on the Season 2 of Lucifer.

Aimee has a slim and beautiful body type with the height of 5 Feet and 2 inches and she weighs around 52 kgs. Her body measurement is 34-23-34 and wears the bra size of 34B. She has dark brown eye color and black color hair.