Rumors were that Aimee and her co-star, Bobby Lockwood were seeing each other. In reality, the reel life couples were not dating in the real life but were contenders for the movie in real life and behind the screens. 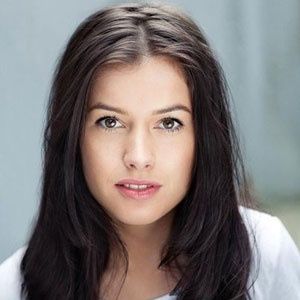 Who is Aimée Kelly?

Aimée Kelly is a British actress. Aimée was a BAFTA & BFI London Film Festival nominee and is best known for her debut leading role in the feature film Sket.

She came to fame after doing CBBC’s children’s drama titled Wolfblood as Maddy Smith. She has starred in Series 1 and Series 2.

Kelly was born on 8th July 1993, in Newcastle, England.  Her mother’s name is Michelle and of Anglo-European ethnicity.

She has a twin sister, Katie Kelly, and a younger sister, Molly Kelly.

Aimée attended Sacred Heart High School for girls, located on Fenham Hall Drive in Newcastle upon Tyne, England. At the age of 11, her English teacher persuaded her to study further in the performing arts.

So she took extra-curricular drama lessons at the Sage Academy of Performing Arts along with her twin, Katie, and then applied for A levels at Tring Park School for the Performing Arts, Tring Park, which was founded as the sister school of the Arts Educational School, London.

She was a boarder for two years at the Hertfordshire campus. She continued her studies along with acting. And before getting the role of Kayla in Sket, Kelly worked as a waitress in a bar and as a shop assistant.

Aimee debuted in the movie, Sket at the age of 16 as Kayla Richards. Her acting in the movie was outstanding and critically acclaimed by the movie critics.

She starred in Call the Midwife. When Kelly was working on an episode of “Call the Midwife”, Debbie Moon, the creator of Wolfblood for some unknown reason stated on her blog “Never Get off The Bus”.

However, at the end of Series 2, Kelly did decide to leave Wolfblood and returned to college.

Some of Aimée’s movies and television series are listed

Her performance in the movie Sket was critically acclaimed by the movie critics as outstanding!

Aimée Kelly: Salary and Net Worth

Click here to know about an English-American actress and musician, Aimee Osbourne