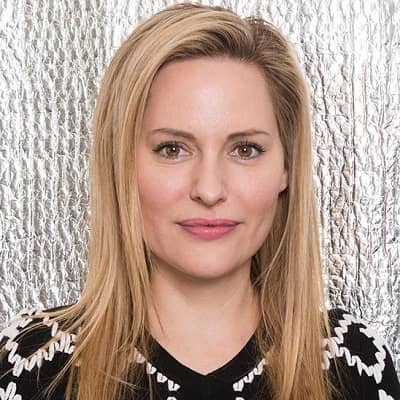 Adversity is just change that we haven't adapted ourselves to yet.

Confidence is the sexiest thing a woman can have. It's much sexier than any body part.

I think that everyone has something about themselves that they feel is their weakness... their 'disability.' And I'm certain we all have one, because I think of a disability as being anything which undermines our belief and confidence in our own abilities.

The wedding was a secret ceremony attended by their two closest friends. Later, they revealed their marriage via Instagram.

Who is Aimee Mullins?

Aimee Mullins is an American athlete who is also popular as an actress, and public speaker. She is famous for her appearance in Five Little Pigs, Quid Pro Quo, and Marvelous.

Aimee was born on July 20, 1975, in Allentown, Pennsylvania, the U.S. Her father’s name is Brendan Mullins. Likely her mother’s name is Bernadette Mullins.

She was born with fibular hemimelia hence both her legs are amputated below the knee when she was one year old.

She is of American nationality and belongs to mixed (English, Irish) ethnicity.

Aimee has her high school education from High School in Allentown. Likely, she graduated from Georgetown University in Washington, D.C.

During her college, Aimee Mullins competed against able-bodied athletes in National Collegiate Athletic Association (NCAA) Division I track and field events. She is the first female amputee in history to compete in Division I NCAA track and field.

Moreover from 2007-2009, Aimee was the one to represent all American female athletes being President of the Women’s Sports Foundation.  Sports Illustrated magazine named her one of the “Coolest Girls in Sports”. Mullins is also in the list of  “Greatest Women of the 20th Century” in the Women’s Museum in Dallas, Texas.

Mullins was appointed Chef de Mission for the United States at the 2012 Summer Olympics and 2012 Summer Paralympics in London.

In the year 2012, Secretary of State Hillary Clinton appoints Aimee to the State Department’s Council to Empower Women and Girls Through Sports.

Her modeling career started when she modeled for British fashion designer Alexander McQueen by opening his London show. Aimee modeled by changing her height between 5 ft 8in and 6 ft 1in after changing her prosthetic legs.

She was also with the Kenneth Cole campaign, “25 Years of Non-Uniform Thinking” on billboards across America in 2009. She also signed a contract for the face of L’Oréal Paris. Moreover, she was appointed as a global L’Oréal Ambassador in February 2011.

In the year 2002, she starred in Matthew Barney’s art film Cremaster 3. Likely, she works on various other films and series like Five Little Pigs, Quid Pro Quo, Marvelous,  World Trade Center, Naked in a Fishbowl,

In the River of Fundament, she starred as Isis in both live and filmed performances.

She played in Young Ones, The Being Experience, Rob the Mob, Appropriate Behavior. She also acted in the NBC television show Crossbones opposite and in the Netflix series Stranger Things.

On April 15, 2010, Aimee appeared on The Colbert Report. She says there that she has 12 pairs of prosthetic legs, with some in museums.

Mullins makes appearances as a speaker on topics related to the body, identity, design, and innovation. Aimme was also TED “All-Star” in the year 2014. The talks she has in the TED conference are translated into 42 languages.

Being one of the successful personality, her net worth is around $2 million. And, her income salary is also around $1 million.

And, her husband, Rupert Friend is an American actor having a net worth of $4 million.

As far as now, she is out of all rumors. She mostly appears in the media by her professional work.

Aimee Mullins stands with a height of 5 feet 8 inches. The information regarding her weight is unknown. She has blonde colored hair and lights brown colored eyes.

Also, get to know about Kathy Ireland, Jairek Robbins, and Rasheda Ali.

The unstoppable! Know the inspiring story of Aimee Mullins, her ‘missing fibula disorder’, and her first ‘love’!