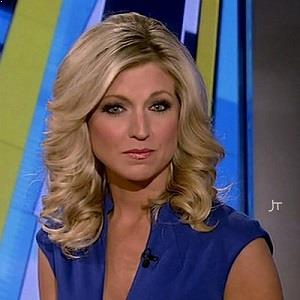 If you don't want an American flag flying at your school, why do you live in the USA?

I think I was afraid of being a mother for many reasons. I wanted to be a good mom and I was fearful at one point of even working at the national level because I was afraid that I would disappoint a child or I wouldn't be as ready for a big position as maybe I should have been when I came to Fox.

There was a point where if you had told me I was going to be a national morning anchor, I would probably have been terrified. But now, I feel prepared. I've been in the business for almost 20 years now. I'm almost forty years old and I've been doing this for a long time, so I felt like, "Okay, I'm ready to do this."

Ainsley was married to Will Proctor on October 13, 2012, and divorced him in 2018 October. Their daughter was born on November 6, 2015, and her name is Hayden Dubose Proctor.

Her first husband was Kevin McKinney. They married in April 2005. in 2010, they divorced.

Who is Ainsley Earhardt?

Ainsley Earhardt is a best-selling American author, three times over. Ainsley is a journalist, an anchor and a correspondent for the Fox News Channel.

She is popular as the co-host of Fox and Friends First and also reports for Hannity with her own segment called “Ainsley Across America”.

She is the daughter of Lewie Wayne Earhardt.

She has an older sister and younger brother. Earhardt grew up in North and South Carolina.

She then transferred to the University of South Carolina (USC) after deciding to pursue a degree in journalism and graduated with a bachelor’s degree in Journalism in 1999.

Ainsley began her career as a reporter for WLTX-News 19 while she was studying at the University of South Carolina (USC). In 2005, she moved to San Antonio, Texas and anchored weekday newscasts of KENS-TV Eyewitness News This Morning.

She is also the co-host of Fox and Friends First.

She has published a book titled “Take Heart, My Child: A Mother’s Dream”.

Ainsley was awarded the “University of South Carolina’s Young Alumni Award” in 2007.

She was also voted the “Best Personality of the Year” in Columbia Metropolitan magazine.

She has an annual salary of $400 thousand and her net worth is $5 million US.

As of May 2019, Ainsley shared her sorrow on the net. Check it out!