Ainsley Harriott at present time is a married man and is the father of two children. He exchanged vows with his Clare Fellows but their wedding date is unknown.

His wife used to be a costume designer and now is living without her spouse. They separated in Nov 2012 on good terms but are not yet divorced.

This former couple has two kids, a daughter Maddie Harriott and a son Jimmy Harriott. 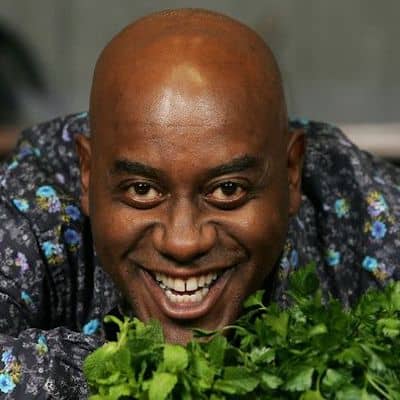 Who is Ainsley Harriott?

As a writer, he has written a total of 18 books out of which 12 of them are considered best-selling.

His full birthdate is 28 Feb 1957 and he was born in Paddington, London, England as Ainsley Denzil Dubriel Harriott. The name of his mother was Peppy and his father’s identity was Chester Leroy Harriott.

His dad was a singer while his mom was a homemaker.

Further, Ainsley’s ancestry is Jamaican and has a sister named Jacqueline Harriott. His brother’s name is Chester Harriott

As per his academics, he passed out from Wandsworth Comprehensive School. He then went to Westminster Kingsway College to get training in culinary art.

Ainsley Harriott started his career after joining Verrey’s restaurant but as an apprentice. Later he became a commis chef in the same organization. Since then he has been featured in several TV shows.

He is mostly known for Ainsley’s Mediterranean Cookbook (documentary), Ainsley’s Food We Love (documentary), and Ainsley’s Good Mood Food (TV Series). He as himself was seen in a few episodes of This Morning, Holding Back the Years, Strictly Come Dancing: It Takes Two, etc.

Besides cooking, Ainsley has shown his dancing skills in a dance competition show Strictly Come Dancing (2015). But he lost and came at 12th position.

By the 2022’s records, he has an estimated net worth of $4 million. However, his per month salary is not yet calculated.

This professional cook is keeping himself away from scandals as well as rumors. But when he said a line “Heh heh, boi”, it got viral and several memes were made from it.

Other lines of his like “Spicy” and “Give that meat a good ol’ rub” also attracted the meme makers.

Ainsley Harriott’s height is 6 ft 3 inches and his body weight is of average shape. Furthermore, he has black hair and has eyes in dark brown color.

Ainsley is officially present on social sites such as Instagram and Facebook with over 90k and 10k followers respectively.

He is also on Twitter with around 22k supporters and on TikTok, he has more than 195k fans.