Bollywood actress Aishwarya Rai Bachchan is married to an actor and a mother of one.

Aishwarya is married. She has been married to fellow Indian actor Abhishek Bachchan since the 20th of April 2007. The couple dated briefly before marriage and has had a happy marriage until now.

The reports are that Aish is pregnant with her second baby.

Aishwarya has dated several models and celebrities over the years. Her first official relationship was with a model by the name of Rajeev Mulchandini. However, this didn’t last long and she went on to date one of the Indian film industry’s biggest stars, Salman Khan from 1999 to 2001. Their relationship was very rocky and they broke up on very bad terms. Rai has even accused Khan of being mentally and physically abusive to her during their relationship.

After her breakup with Khan, Ria dated another actor Vivek Oberoi, which also ended on bitter terms. Her relationship with Vivek was the last before she dated and eventually married Abhishek. 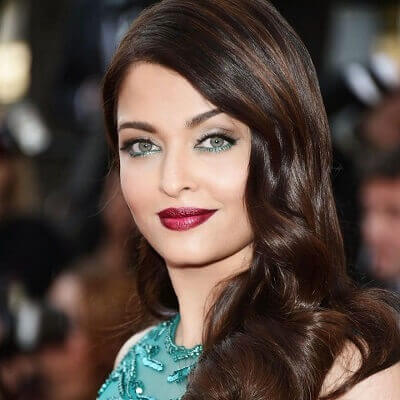 My family is my strength and my weakness.

I'm not the type who'll yell about my achievements from the rooftops.

I know for a fact that if there's a role which I am suited for, I'll be signed on. I'll never go begging.

Who is Aishwarya Rai Bachchan?

Aishwarya Rai Bachchan is one of the most popular actresses in the Indian film industry in addition to being the winner of the 1994 Miss World Pageant.

She is one of the biggest celebrities in India and has won numerous awards in Bollywood for her roles in movies such as Jodhaa Akbar, Dhoom, Ae Dil hai Muskil, and many more. Moreover, she has also been cited as the most beautiful woman in the world numerous times in the media.

Aishwarya Rai Bachchan was born on the 1st of November, 1973 in Mangalore, Karnataka, India. As of 2021, Aishwarya is 47 years old.

She was born to her father Krishnaraj and mother Vrinda. Her father was an Army biologist while her mother worked as a housewife.

She was raised along with her elder brother Aditya Rai, who currently works as an engineer in the merchant navy. Her nationality is Indian and her ethnicity is South Indian.

Aishwarya attended Arya Vidya Mandir High school initially. Then she did her intermediate schooling at Jai Hind College for a year before joining the DG Ruparel College.

She was a talented and hardworking student, which is evident due to her score of 90 percent in her HSC examinations.

She later attended Rachana Sansad Academy of Architecture with plans to become an architect but eventually dropped out to pursue a career in modeling.

Aishwarya Rai Bachchan’s career in modeling started to take off after she gained huge public recognition for her appearance in a Pepsi commercial. Her beauty caught the eyes of people all over India and she came to be popular.

Her popularity increased further when she won 2nd place in the 1994 Miss India pageant and also won the Miss World pageant in the same year.

She worked as a model for some more time until her debut in 1997 with the Tamil movie Iruvar. Though Iruvar was a critical success it didn’t perform at the box office.

Rai’s acting was also not very good in her initial movies and reviewers were critical of this. She went on to act in a bunch of other movies such as Jos, Hum Dil De Chuke Sanam, etc.

Her breakthrough role came in 2002 in the movie Devdas. The movie was a major international success both critically and commercially.

Rai’s role in the movie alongside popular Indian actors Shahrukh Khan and Madhuri Dixit was endlessly praised by reviewers and she won her 2nd Filmfare best actress award for the movie.

After this, she played leading roles in the commercially successful Dhoom series, Guru as well as several other roles. Her next big success came with the 2008 movie Jodhaa Akbar where she played the female lead, Jodha Bai.

The film performed brilliantly both commercially as well as critically and Rai’s role in this movie is regarded by many as the finest acting we have seen from the actress till now. She played leading roles in many other movies such as Guzarish, Ae Dil hai Muskil, and Sarjit to name a few.

Her success in her acting career is a major reason for her superstardom in India and her celebrity status throughout the globe. She is also very popular in media throughout the world and has been cited as the most beautiful woman in the world many times throughout her career.

She has earned a lot of awards in Bollywood for her acting aside from that she has received Padma Shri civilian award, which was awarded by the Indian government for her contribution to the arts.

She has also starred in a lot of commercials and is one of the top brand ambassadors in the country. She has also been involved in a lot of social and humanitarian works and that is evident if we look at her role in donations and social awareness programs that are not just limited to India.

Aishwarya Rai Bachchan has an estimated net worth of around $100 million as of 2021. While her annual salary remains unknown, many estimates state that she makes approximately $1.2 million per movie.

Aishwarya Rai Bachchan has been involved in many rumors and controversies throughout her long and successful career. She sued Star and Style magazine in 1996 for an amount of 2 million dollars for publishing fake rumors about her and actor Akshay Kumar.

Her relationship with fellow actor Salman Khan was very controversial and the two broke up on very bad terms in 2001. Rai even accused Khan of being physically and mentally abusive to her during their relationship.

Recently, the rumors of Rai having tested positive for coronavirus were confirmed by the actress. Her husband Abhishek and father-in-law, Amitabh Bachchan had already tested positive before she, and fans were worried that Aishwarya and her daughter had also contracted the disease.

She confirmed this and just recently Rai and her daughter were admitted to Nanavati Hospital just a couple of days after Amitabh and Abhishek were admitted. Rai along with her family is in stable condition despite the disease and has been isolated in the hospital with mild symptoms.

Aishwarya stands at a height of 5 feet 7 inches and weighs approximately 56 kilograms. Her body measurements are approximately 34-26-36 inches. She has beautiful eyes that are Hazel Green Blue and her hair is black.

You may also like to read more about the Bio, Career, Net Worth, and more about Bipasha Basu, Priyanka Chopra, Anil Kapoor, and more.