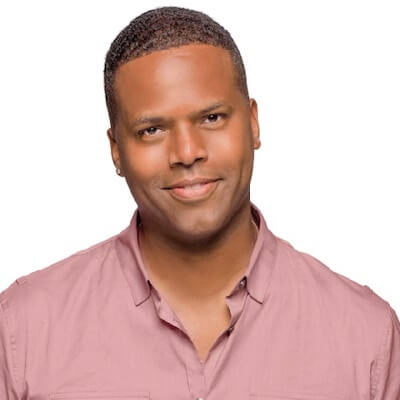 A.J. Calloway is currently married to Dionne Walker. The couple exchanged wedding vows on 8 June 2013. From their relationship, they have 3 children as of 2020. Their children include two daughters; Ava Claire Calloway and Amy Calloway and a son; Albert L. Calloway III. Their marriage is still holding on despite the controversies surrounding Calloway.

Calloway was previously married to Dr. Lao Sealey in April 2005. However, their marriage didn’t work out as they got divorced just 2 years later in 2007.  He does not have any children from his first marriage.

A. J. Calloway is an American Entertainment Reporter best known as the original host on 106 & Park, which aired on BET as well as the Co-Host of the entertainment news program, ‘Extra’.

After graduating from Howard University, he began his professional career from New York as a journalist. The role that made him come out in the limelight came in the form of the Original Host in the show 106 & Park, which aired on BET (Black Entertainment Television). He Co-hosted the show alongside Marie Antoinette Wright (Free, on the show) for nearly five years before leaving the show on July 28, 2005.

He was recently fired by Warner Brothers from Extra after the studio investigated multiple allegations of sexual charges filed against him.

A. J. Calloway: Net Worth, Salary

As of 2020, A. J. Calloway has an estimated net worth of around $4 million. His current job is unknown as he was recently fired and he had not made information on his salary public.

However, we do know that an average American entertainment reporter with a few years of experience makes around 52k U.S. dollars annually. We can assume his salary to have been higher because he was a famous TV personality as Extra was a popular show.

A. J. Calloway was fired from Extra back in 2019 after Warner Brothers investigated the multiple claims of sexual assaults and even rape allegations made against Calloway. The earliest account dates back to 2003 and the most recent was in 2013. Warner Bros was criticized for taking too much time before taking action against Calloway. As of now, he has been accused by 6 women of sexual assault and misconduct and among them, three involved alleged rape.

Calloway however, has vehemently denied all of the allegations against him, saying that he has never assaulted anyone and looks forward to clearing his name.

Calloway stands at a height of 6 feet 3 inches and weighs around 69 kg. He has black hair and brown eyes.

You may also like to read more about the Bio, Career, Net Worth, Body Measurements, and more about Anna Gilligan, Patrick Whitesell, Ben Aaron, and more.