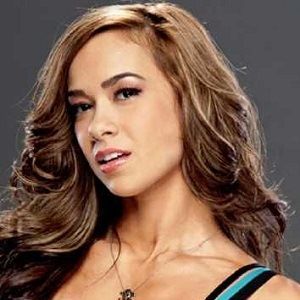 I'm not the sexy girl. I'm more youthful and innocent, the girl who wears jeans and T-shirts and sneakers. But fans have accepted that I'm a tomboy. There's a different group of people who find that attractive.

Everything I was told should be my greatest insecurities and weaknesses, everything that I've been labeled - short, nerdy, skinny, weak, impulsive, ugly, tomboy, poor, rebel, loud, freak, crazy - turned out to be my greatest strengths. I didn't become successful in spite of them. I became successful because of them.

AJ Lee is a married woman. She got married to former professional wrestler Phil Brooks (aka CM Punk) on Friday, June 13, 2014.

The couple has a home in Milwaukee, Wisconsin, and Chicago, Illinois where they spend there time. The marriage between the two has been going on strong and we do wish them the best.

Who is AJ Lee?

The former professional wrestler and author, AJ Lee is best known for her stint in WWE which she began in 2009.

AJ Lee was born in Union City, New Jersey, the United States on March 19, 1987. Her birth name is April Jeanette Mendez and she is currently 33 years old.

Talking about AJ’s education history, she graduated from Memorial High School. Later on, she enrolled at New York University’s Tisch School of the Arts to study film and television production and writing but dropped out of the same in six months.

She then took up part-time jobs to support her family financially and save for enrollment in a wrestling school.

During 2007, AJ Lee enrolled in a wrestling school. By March, she was training under Jay Lethal. In the same year, in September, Mendez made her official entry in the ring under the name of Miss April, wrestling on the New Jersey independent circuit.

Eventually, AJ Lee held the title until April 2011, finally losing it to Aksana. Finally, on October 22, AJ also stepped down from her General Managerial duties. Similarly, in 2013, she won a battle royal to become the number one contender to Kaitlyn’s Divas Championship. She has got her first Divas Championship after then defeating Kaitlyn.

In January 2014, AJ also became the longest-reigning Divas Champion, surpassing the previous record set by Maryse. Unfortunately, AJ’s reign, however, ended on a tragic note when she lost an impromptu title match after she challenged the debuting Paige. Besides that, she regained the title but lost it almost immediately to Nikki Bella.

On March 29, 2015, AJ Lee allied with Paige to fight against the Bella Twins at WrestleMania 31. This was the last match for AJ as five days later, on April 3, 2015, WWE announced her decision to retire from in-ring competition. The highlight of her career was her record-breaking reign as the Divas Championship titleholder for 295 days.

The 32 years old wrestler has maintained her celebrity status and has not harmed any other person in her career. Currently, she is far from rumors and controversies.

Her hair color is dark brown and her eye color is light brown.

Aja Naomi King to be a mother after two miscarriage! Who is the baby father?