Posted by MarriedBiography Posted on September 10, 2020 | In Dating , Lifestyle , Relationship
Share this 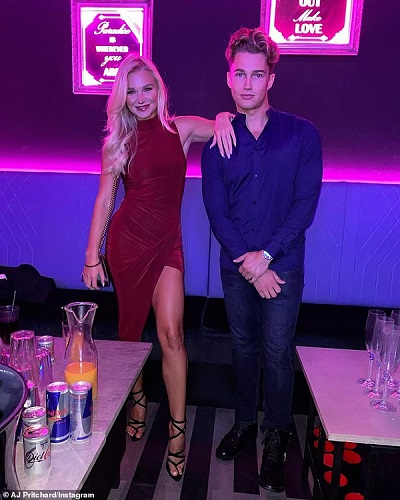 AJ Pritchard was in great spirits. He was on a date night out with his girlfriend Abbie Quinnen. And she looked gorgeous in a skin-tight red dress. The former Strictly star posted the picture of this outing on his social media for his fans and the two just look sweet together.

AJ Pritchard and his date night out

On this Monday 7 September 2020, AJ Pritchard, 25, and his girlfriend Abbie Quinnen were on a glam date night out. He shared a sweet snap of this outing with his social media followers.

Abbie is a professional dancer and she is 23 now. She looked stunning in a skin-tight red-colored dress and was standing next to her fellow ballroom boyfriend, AJ Pritchard. Additionally, her toned legs were seen through the thigh-high slit in her asymmetrical dress pattern. She had worn strappy black heels and was carrying a black over-the-shoulder bag.

On the other hand, AJ was in his navy blue shirt with dark jeans and black shoes. And he looked dapper in this attire. Under the post, AJ wrote:

The couple started dating in 2018. And that year, Abbie had auditioned for the ‘Get on the Floor Live Tour’ of AJ. Abbie and AJ later started a relationship. And this year in April they celebrated their one-year anniversary. On the occasion, he posted a sweet snap of the two on his Instagram and wrote a romantic note below it:

The picture was of the time they had their final performance for charity routine Dress Up, Dance, Donate earlier the same month. Additionally, Abbie also posted the same photo on her Instagram but captioned it:

‘Happy year anniversary to this special one ❤️.’

Earlier in the same month, AJ had quit the show Strictly. Because he had revealed that he had big ambitions and wanted to exceed the fame of Ant McPartlin and Declan Donnelly.

AJ and his next venture

AJ has quit Strictly this year. But his name is being suggested for this year’s series of I’m A Celebrity…Get Me Out of Here! A source had revealed this news to The Sun UK magazine. But this year the show producers have shifted the show venue to Wales instead of in Australia. The shooting will be in a Welsh castle. Probably this is because Australia is closed to outsiders the whole year due to the coronavirus pandemic.

The source had said:

‘Strictly would like to think that no one leaves the show and goes on to bigger things, but AJ will be very popular in the jungle and it’ll be a good platform for him.”

‘His deal is all but done and ITV are delighted they’ve been able to prize him away from their rivals.’

AJ had started dancing at the age of 12. And he hails from Stoke-on-Trent. He and Chloe Hewitt were dance partners and won several competitions. The two also made it to the semi-finals in 2013 on Britain’s Got Talent.