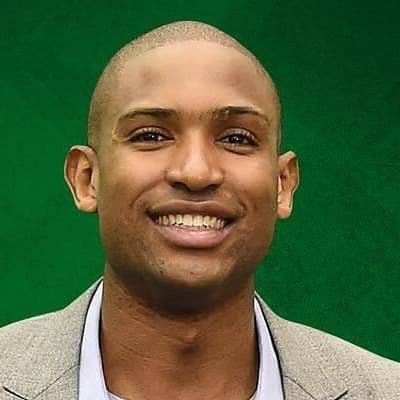 What is the relationship of Al Horford?

Al Horford is living a blissful conjugal life. He is married to the 2003 Miss Universe Amelia Vega. The couple first met in 2009. After two years of dating, the couple tied the knot on December 24, 2011, in Santo Domingo.

In February 2015, the couple welcomed their first child a son named Ean Horford Vega. On November 27, 2016, the pair had their second child a daughter named Alia Horford Vega.

Who is Al Horford?

Al Horford is a Dominican professional basketball player who is currently playing for the Boston Celtics of the National Basketball Association as a Power forward, Center.

He was the highest-paid Latin American basketball player and a five-time NBA All-Star in the year between 2017 and 2018.

Al was born on September 18, 1986, as Alfred Joel Horford Reynoso. He hails from Puerto Plata, Dominican Republic. He is a native of Bahamian.

His nationality is Dominican and belongs to the All-American ethnicity.

Al joined the University of Florida on a scholarship where he played under coach Billy Donovan. In 2004, he played for the Gators position at center in the frontcourt along with David Lee. Also, the team won the 2005 Southeastern Conference Tournament championship.

The basketball player has managed to maintain a clean profile to date. He hasn’t been part of such controversial acts that could hamper his personal and professional life.

Al earned amassed a fortune throughout his successful profession as a basketball player. As of 2022, he has an estimated net worth of around $70 million. Similarly, his estimated salary is around $26.5 million.

Additionally, he earns through several endorsements including big brands like Nike, Dove, Intel, LG, and so on. In 2019, he was enlisted in the 49th position as the World’s Highest-paid athlete World.

As a basketball player, Horford has an impressive height of 6 feet 9 inches tall. Likewise, his weight is about 109 kg. He has dark brown pair of eyes and black hair color.