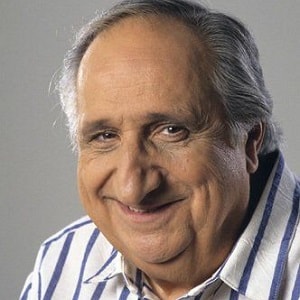 “What's this all about? and it better be good... my wife thinks I'm fooling around with the meter maid.”

Al Molinaro married Jacquelin Martin in 1948 and welcomed a son, Michael Molinaro. The couple could not hold the relation and divorced in the year 1980.

Later, he married Betty Farrell in 1981 and the couple were together till his last breathe.

Who was Al Molinaro?

Al Molinaro was an American actor. He was popular for his television sitcom roles as Al Delvecchio on ‘Happy Days’ and Officer Murray Greshler on ‘The Odd Couple’.

He died on October 30, 2015, at the age of 96 due to complications from an infected gallbladder at a hospital in Glendale, California. His wife, son and three grandchildren survived him. He was buried at Grand View Memorial park and Crematory.

He was born on June 24, 1,919 in Kenosha, Wisconsin, USA. His father’s name is Raffaele Molinaro and his mother’s name is Teresa Molinaro. He is the second-youngest of ten children. His father was a prominent hotel owner and leader of the Kenosha Italian community. His brother, Joseph, was Kenosha Country’s longest-serving district attorney and retired as a municipal judge.

He discovered a talent for public speaking at school and struggled at high school, staying on an extra year to graduate. He left home and moved to LA in 1940 to become an actor.

He made his way to California and worked on the edge of the television industry and saved money to start his own collection agency. He sold his business and he became interested in Southern California real estate speculation. His properties were purchased by a conglomerate and he got money to launch a career in acting.

Molinaro learned acting and played as guest roles on television sitcoms ‘Biwitched’, ‘Get Smart’, ‘Green Acres’, and ‘That Girl’. He got the role of police officer Murray greater on the television sitcom ‘The Odd Couple’. He was hired by Garry Marshall on the sitcom ‘Happy Days’ in 1976. Molinaro played the role of Al Delvecchio and he was known for the singing catchphrase ‘Yeah-yeah-yeah-yeah…’. He left ‘Happy Days’ in 1982 and starred in a failed TV pilot called ‘The Ugly Family’ in 1982.

Molinaro along with Anson Williams opened a chain of dinners ‘Big Al’s’ but the business went defunct. He portrayed the role of grandfather Joe Alberghetti in the “The Family man’ which ran for only one season. He was proud of his role on ‘Happy Days’. He played the guest role on the ‘Don and Mike Show’ from 1985 to 2008.

He reprised the role of Al Delvecchio from ‘Happy Days’ in Weezer’s 1994 music video of the song ‘Buddy Holly’. And he appeared in the ‘Happy Days reunion Special’ on ABC in 1992.

In the early 1990s, he retired from acting in television and films but continued to appear in TV commercials until the early 2000s. He announced to write a book in 2004, about his childhood in Kenosha and his acting experience.

He had an estimated net worth of $10 million before his death.

He was not involved in any rumor and controversy in his professional life and in his private life.

He had black and white hair and light brown eyes. Other information about his height, weight, etc. are not available.