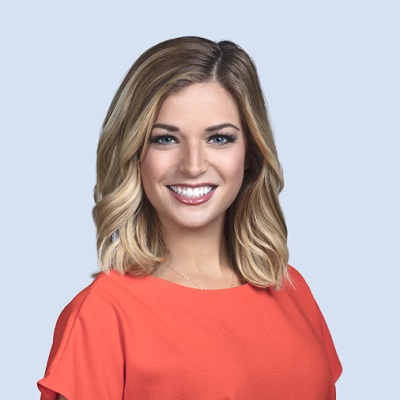 However, she can frequently be seen sharing photos with a guy named Hector Mancebo from 11th June 2018.

She loves snowboarding, playing the ukulele, and traveling.

Also, she is a budding yoga enthusiast and tries to practice at least once a week and can do a headstand.

Who is Alaina Pinto?

Alaina Pinto is an American journalist.

Alaina is currently serving as the Traffic Reporter for WHDH’s 7News Today.

She was born on 10th April in an Italian-American family. She grew up in the west of Cleveland, Ohio.

She attended The University of Akron, Akron, Ohio in 2010 and graduated with a Bachelor of Arts degree in Media Production and Radio/TV. She minored in theatre.

She worked as a Health Unit intern with Ideastream handling their production operations. During the work, she had to edit, research, do guest relations, field shoots, create logging tapes, and many more.

Since December 2016, she was a traffic reporter for 7 News WHDH in New England.

In July 2017, she undertook a roller coaster challenge at Six Flags Amusement Park. She, along with 22 other people went on in the roller coasters for charity. She collected 100 tickets and donated to the Boys and Girls Club of Boston.

She was nominated for two students Emmys in 2012 and 2013 for her work as an Editor, Host and Promotions Director.

Her salary as a journalist is estimated to be $40527 USD per year.

She is blonde with blue eyes.