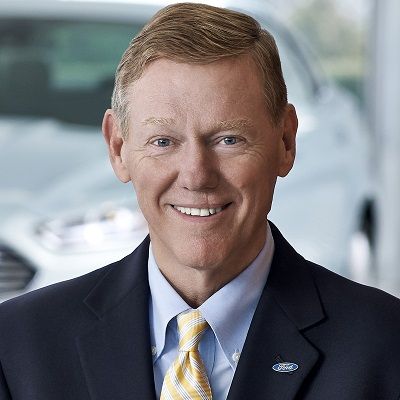 Leadership is having a compelling vision, a comprehensive plan, relentless implementation, and talented people working together.

What I found over the years is the most important thing is for a team to come together over a compelling vision, a comprehensive strategy for achieving that vision, and then a relentless implementation plan.

If you get honest feedback and do nothing about it, then the feedback will stop.

Alan Mulally is a married man. He married Nicki Mulally. They married in the year 1970. He is a one women man as it has been several years of their marriage, there is no news of disputes between them.

Likewise, he is the father of five children.

Who is Alan Mulally?

Alan Roger Mulally known as Alan Mulally is an American aerospace engineer. Similarly, he is a manufacturing executive. Also, Alan is famous as the former President and Chief Executive Officer of the Ford Motor Company.

Alan was born on 4th August 1945 in Oakland, California, U.S. She was born to father Charles Richard “Dick” Mulally and mother Lauraine Lizette Clark. His parents met each other at a USO dance. He spent most of his childhood at Laurence, Kansas which is his mother’s hometown.

Similarly, he was a member of the Plymouth Congregational Church. Rev. Dale Turner was his mentor and inspiration at the time. To study about the minister’s influence on the congregation, he sat in front of the church.

Another source of his motivation when he was 17 years old was president John F. Kennedy’s who challenged to send a man to the moon. It is known that he had four siblings. Born in California, his nationality is American.

Alan attended the University of Kansas and graduated with a Bachelor o Science and Master of Science degree. He graduated in aeronautical and astronautical engineering. At that time he was a member of the Kappa Sigma Fraternity.

Likewise, as a Sloan Fellow, he received a Master’s degree in Management from MIT’s Sloan School of Management in the year 1982.

Immediately after he was out of college he was hired by Boeing in the year 1969 as an engineer. Similarly, he held a number of engineering and program management positions. He contributed to the making of Boeing 727, 737, 747, 757, 767 and Boeing 777.

Likewise, for the 777 programs, he worked first as a director of engineering and vice-president and general manager from September 1992. Later he became the Vice President of Engineering for the commercial airplane group. Due to his good work, he was promoted to senior vice president of Airplane Development.

His work on Ford Motor Company

Also, he made the first decision at Ford which was to bring back the Taurus nameplate. He took over the “The Way Forward” restructuring plan at Ford to Turn around the massive loss and market share decline.

Similarly, he led the effort for Ford to borrow US$23.6 billion by mortgaging all of Ford’s assets. In the year 2007, he presided over the sale of Jaguar Cars and Land Rover to Tata Motors. In the year 2008, Ford was suffering from a huge loss so they decided to cut the salary of Mulally.

Furthermore, on 1st July 2014, he resigned as CEO from Ford.

Alan Mulally Net worth and Salary

Over a period of 16 years, he sold the GOOGL stock worth over $13,958,108. In 2014, Mulally bought a home in Paradise Valley’s exclusive Casa Blanca neighborhood. He paid around $2.85 million for a 5,850-square-foot house behind the neighborhood’s guard gate.

It has four bedrooms and six bathrooms which were remodeled in 2006. Some of the features of the house are beamed ceilings, oak floors, a master bedroom with a huge closet which includes a small washer-and-dryer set.  He also owns a home in Mercer Island, Wash.

In the year 2006, Alan was named as the person of the year for his Performance at Boeing by Aviation Week & Space Technology. He was named the Person of the Year by the Financial Times ArcelorMittal Boldness in Businessman Awards.

Further, in the year 2011, he was named the CEO of the Year by Chief Executive magazine.

Alan has salt and pepper hair and he has hazel color eyes.