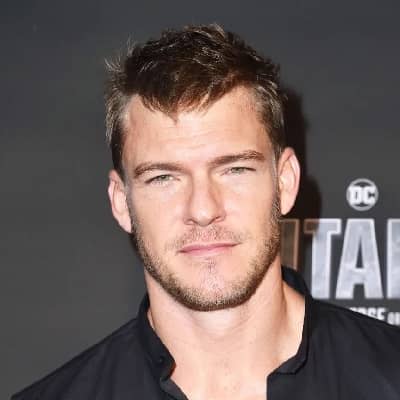 I didn't really grow up a comic book fanatic.

I have two or three shows that I Follow, and even those are few and far when I can see them on Netflix. I don't really watch anything on TV. It's not really a priority for me.

I was a big baseball player, and my passion in life, in third grade, was collecting baseball cards. That my childhood thing.

Alan Ritchson is a married man and a father of three children. He is blessed to be married to the love of his life, Catherine Ritchson.

The couple tied the knot in May 2006. Further, there is no other information available regarding their wedding. Catherine shared a throwback wedding picture on her Instagram on May 12, 2016, wishing Alan on their ten marriage anniversary.

Who is Alan Ritchson?

Alan Ritchson is an American renowned actor, director, model, and singer. He is widely recognized after appearing on the Spike TV sitcom Blue Mountain State where he portrayed the role of Thad Castle from 2010 to 2011.

Alan was born on November 28, 1982, as Alan Michael Ritchson. He hails from Grand Forks, North Dakota, U.S. His nationality is American and belongs to mixed descent of Czech, English, and German.

Ritchson is the second child of his parents David Ritchson (Father) and Vickie Ritchson (Mother). His father is a retired U.S. Air Forch chief master sergeant. Likely, his mother was a high school teacher.

He was raised in Rantoul, Illinois with his two brothers named Brian Ritchson and Eric Ritchson. At the age of 10, his family moved to Niceville, Florida where he attended Niceville High School.

In 2003, she received his Bachelor’s degree in an Associate of Arts. Ritchson was also a member of the Fine Arts division’s Soundsations and Madrigal Singers.

Alan participates in the 2004 American Idol as one of the top 87 contestants in the third season. In an audition, he sang “You Are the Sunshine of My Life” by Stevie Wonder.

He was selected for the next round but he could not manage to make in top 32. In the year 2006, he has also released his song, This Is Next Time.

Alan made his acting debut through the superhero television series, Smallville where he starred in the role of Smallville. In 2006, he was cast in the television film, Though None Go with Me as an Army officer.

That same year, he made his film debut through the film, The Butcher where she portrayed the role of Mark. Then he served as a character model for the video game “Beowulf: The Game” in the year 2007.

Afterward, he made an appearance in numerous film and television series such as,

On the other hand, Ritchson made his debut as a director, co-writer, and producer in 2018 through the film Dark Wed: Cicada 3301, a comedy-thriller film inspired by the eponymous organization.

In the film, he also co-starred as an NSA agent. He has also appeared in a web series entitled, Enormous Friends along with co-star, Rob Ramsay. Similarly, Alan has modeled for numerous brands such as Fitch and Abercrombie, N2N Bodywear, and so on.

To date, Alan has not been part of any sorts of rumors and disputes that create a buzz in the media. Also, he stays miles away from such controversial acts that could hamper his personal and professional life.

As of 2021, the actor has an estimated net worth of around $3 million throughout his multiple profession as an actor, model, and singer. However, his salary, yearly income, and other assets are still under review.

The actor stands at the height of 6 feet 2 inches tall whereas his weight is around 89 kg. He has an athletic body type with a fair complexion.

Further, he has a light brown hair color with hazel blue pair of eyes. His chest, waist, and biceps size are 45, 34, and 16 inches.