Updated On June 20, 2022 | In Career , Interesting Facts , Relationship
Share this 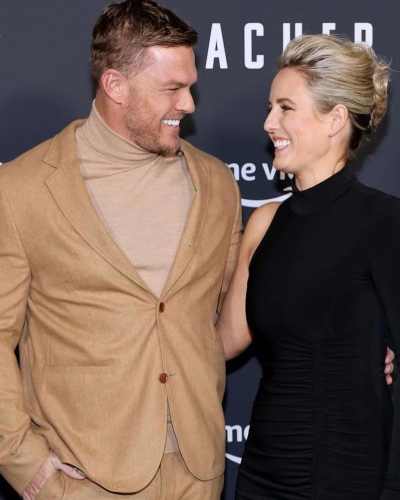 Catherine Ritchson, 33, is the mother of three sons of actor Alan Ritchson. She was recently spotted at the premiere of Ritchson’s new series Reacher at The Grove in Los Angeles.

Alan is an actor, director, model, and singer. In his recent shows, he plays the character of Jack Reacher, a 6 feet 5-inch military drifter who is forced to go back when a murder is committed in a Georgia town.

Ritchson has always been grateful to have Catherine as his wife. He adores her very much and is a decent husband. Catherine shared the moment when she found out he’d been cast in Reacher.

“The moment after Alan got off a phone call, he came into our bedroom and stared at me as if he had seen a ghost; no words,”

“Then I gasped “You got Reacher?!!??” And he nodded with a smile. Actually, I did all the jumping and screaming, but it was all directly in his ear, so it was a fully immersive experience for us both.⁣ I hope you love this series as much as Alan loved making it.”

Alan and his beautiful wife Catherine joined together on the red carpet on Wednesday night, February 2. The beautiful couple attended the premiere with a stunning countenance.

The Reacher’s star dressed up in a gentleman look in a fitted turtleneck, a suit jacket with matching trousers, and a pair of suede boots for his big night. Similarly, Catherine sported in a skintight black gown with a chic mock neckline and long sleeves. The beautiful couple also shared a sweet kiss at the premiere.

Catherine and Alan share three sons together; Calem, 9, Edan, 7, and Amory, 6. The couple has been together for almost 16 years. They still shared a strong bond with each other. In May 2006, the pair walked down the aisle.

Catherine completed her education at the University of Florida. She earned a bachelor’s degree in finance, science, and Russian.

3. Catherine is a writer

She made her debut as a writer from Employee 665 under AllyCat Entertainment.  Presently, she works in her husband’s production company. She also produced the short film ‘Tree House Time Machine’.

Catherine initially worked as a development intern at ‘Comedy Central’ from June 2004 to August 2004. She then joined as a finance teaching assistant at the ‘University of Florida’ in September 2005.

Catherine quit the job after working for nine months as a finance teaching assistant. Later on, she worked as a financial analyst at ‘International Creative Management.

Catherine is quite active on social media platforms. She goes by the handle @catritchson on Instagram where she has over 4k followers.

Alan Ritchson is an American renowned actor, director, model, and singer. He is widely recognized after appearing on the Spike TV sitcom Blue Mountain State where he portrayed the role of Thad Castle from 2010 to 2011. More bio…