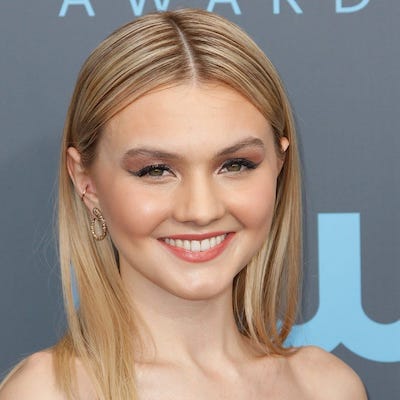 What is the relationship of Alana Boden?

As to some reports, at present Alana Boden is in a romantic relationship. She is dating a guy named Jamie Stanley.

The rumors of their romance are in the media for quite some time. Her boyfriend is a Stuntman by profession.

Before him, Alana was having an affair with a model Chris Parsons. They started to see each other in 2014 but broke up after two years in 2016.

Who is Alana Boden?

Her debut in the acting world was with a short movie Queensway in 2011 where she played the role of Millie. She won London Short Film Festival for Rising Star in 2016 and was nominated for Critics’ Choice Awards in 2018.

In the coming future, she will be seen in a movie titled Horrorscope which is currently filming.

Her full birthdate is 14 Jan 1997 and her birthplace is Surrey, the United Kingdom as Alana Evie Boden. The name of her mother and her father name is not revealed.

Further, Alana’s ancestry is English plus her nationality is British and has two sisters.

As to her academics, she never went to college instead she was homeschooled.

Alana Boden as an actor has been featured in many screen projects. She is noted for her acting in the movies Brash Young Turks as Python Agent, Hostage Radio as Julia, and The Invitation as Lucy.

She is also famous for her brief roles in TV shows. Some of her other acting credits are,

Alana as an artist has been part of some theatre acts. She has shown her skills in a stage performance titled The Tempest as Spirit in 2011.

By the reports of 2022, Alana Boden has an estimated net worth of $500 thousand which she collected from her work.

Alana Boden’s height is 5 ft 3 inches and her body weight is 46 kg. Furthermore, she has blonde hair and her beautiful eyes are blue in color.

Alana Boden is available on social sites such as Instagram where she has more than 30.6k followers. But she is staying away from Facebook, Twitter, and TikTok.