Albert Deprisco is an actor and businessman who owns A.M Deprisco Wellesly.

Albert Deprisco is a married man. He is the second husband of Lisa Niemi. Lisa is an author, actress, and dancer by profession.

At first, Lisa was married to Patrick Swayze who had passed away due to pancreatic cancer in 2009.

During the time, Lisa was devastated and heartbroken where Albert came into her life to heal her broken heart and soul. It is reported that the pair met through a mutual friend in the year 2012.

After dating for over a year, the duo announced their engagement on December 28, 2013. Then, the pair later tied the knot on May 25, 2014, in Mar-a-Lago Club, Plam Beach, FL. Lisa’s wedding ring is of a cushion-cut diamond eternity band. Even after six years of their marriage, the couple shared a strong bond with each other and living a blissful life together.

There is not even one rumor and controversy surrounded in the media regarding their relationship. However, the couple doesn’t have any children of their own to date. While Lisa was married to the ex-husband, she was pregnant. Sadly, she miscarried her baby in her womb. 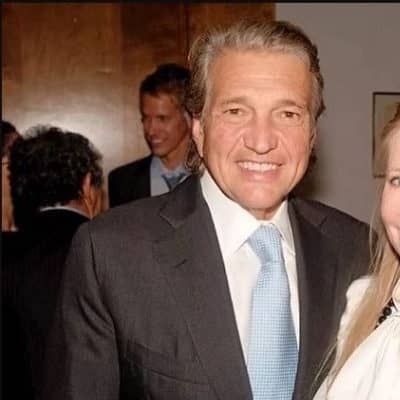 Who is Albert Deprisco?

Albert Deprisco is an actor and businessman by profession. He owns a jewelry business under the name A.M Deprisco Wellesly. He is better known as the husband of actress Lisa Niemi.

Albert was born in Boston, Massachusetts, United States, on August 30, 1955. As of 2021, he is 66 years old and his sun sign is Leo. Albert holds an American nationality and belongs to the Caucasian ethnicity.

Albert comes from a wealthy business-oriented family. The name of his parents is Francis DePrisco (father) and Marie DePrisco (mother).

He has a sister named Donna E. Depeisco. Furthermore, his academic details are under the curtains at the moment.

Albert’s jewelry shop is pretty famous and a family blood business. His shop provides designer jewelry and customizes jewelry as per customers’ demands. From 1995, he owned his parent’s business and has had to work independently for over 25 years.

In 2005, Albert moved the store to 571 Washington Street located in Wellesley, Massachusetts US. Similarly, he has stores in Downtown Boston, Massachusetts, as well as one on Cape Cod in Osterville, Massachusetts.

There is not much information available regarding his acting career but he was mostly commended in the movie era of ’70s-’80s.

Albert has been able to manage his clean profile till now. He keeps himself away from controversial acts that could create a huge buzz in the media. Thus, he is not available on any rumors and disputes.

Albert has accumulated around $40 million dollars of net worth as of 2020 throughout his successful career. He is a wealthy man and lives a lavish lifestyle. However, his salary, yearly income, and other assets are still under review.

Although, Albert is in his 60’s he has a fit and healthy personality. He stands at the height of 5 feet 8 inches tall with an average weight. However, his actual measurement of weight is not available.

Albert recently creates an Instagram account in June 2020 and has uploaded only 4 posts till now. Similarly, he has 81 followers as of now. Further, he is not available on other social media sites including Facebook and Twitter.

What does Albert DePrisco do for a living?