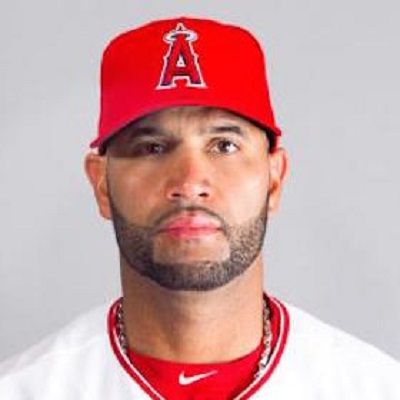 A lot of people said I could be a good player. I just wanted the opportunity to show it. I just let it happen

I don't know why people say I'm not supposed to be doing what I'm doing. I'm just trying to do my job. I'm blessed, and I'm glad that I'm blessed

If I need to help my team and play a different position for that game because somebody is hurt or they want to give a day off to somebody, I'll do it

It's not what you did last year. It's what you're going to do this year. That's more important.

Albert Pujols has been open about his personal life. He married his wife, Deidre on the first of January, 2000. Together they gave birth to four children Albert jr., Sophia, Ezra, and Esther Grace. In addition, Deidre had one child from her earlier relationship, Isabelle.

Who is Albert Pujols?

José Alberto Pujols Alcántara is a Dominican-American professional baseball baseman and a designated hitter. Presently, he plays for the Los Angeles Angels in Major league Baseball (MLB). Pujols is a ten-time All-Star player and a three-time National League Most Valuable Player.

Pujols was born on January 16, 1980. He was born in Santo Domingo, the Dominican Republic as the only child to his parents. His father’s name is Bienvenido Pujols. His father was a softball pitcher who introduced the game baseball to Pujols.

Pujols is of Dominican-American nationality and belongs to Dominican Republic ethnicity.

Although Pujols was born in Dominican, his family emigrated in 1996 to New York City and later moved to Independence, Missouri. Pujols studied his high school years at Fort Osage High School in Independence.

After graduating from high school, Pujols was given a baseball scholarship to Maple Woods Community College. There he hit a grand slam and turned an unassisted triple play in the first game of his only college season.

In 2002, Pujols started the season cleanup but was later on moved to the third spot, where he stayed for the rest of his Cardinals Career. In August, he hit his 30th homerun which made him the sixth Cardinal to have back to back 30 home run seasons.

Pujols signed a new $100 million extension contract for seven years with the Cardinals in 2004. However, he also moved to first base following the departure of Tino Martinez.

After a lot of successful years with the Cardinals, Pujols signed a $254 million worth contract for 10 years with the Los Angeles Angels. Unfortunately, he had a rough few months starting with his new team but got into form after some time.

Since then Pujols has had decent seasons with the Angels. Although his performance has had frequent dips, Pujols continues to play for the ‘Angles’ to date and is a strong contender for the ‘Hall of Fame.’

Pujols has won a lot of awards throughout his career. He has bagged one NL rookie of the year awards. Similarly, he has received three NL MVP awards. Also, he has made into the MLB All-star team nine times throughout his career.
He has got two Best international Athlete and four best MLB player awards. Furthermore, he has won the World Series twice and the NL league thrice.

There is no open information about Pujols being in any scandal or controversies.

Albert Pujols has a height of 6 ft 3 inches. Furthermore, he weighs about 107 kg. He has black hair but he prefers shaving it and staying bald. His eyes are brown in color.