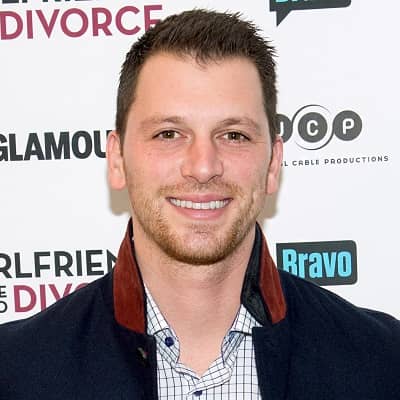 Albie Manzo is taken and off the market. He is in a romantic relationship with Jamie Virginia Rose. The rumors of them dating was confirmed when Albie posted pictures of them on Instagram.

But when they were seen kissing the rumors were cleared. His girlfriend occasionally appears on his social media posts.

Before her, he had an affair with Lindsey Andrews (cheerleader) and Brittany Parks (orthodontic technician).

Who is Albie Manzo?

Albie Manzo is an American reality star. He was seen in a Bravo TV’s reality show Manzo’d with Children.

Albie also hosts a podcast named @dear_albie. He is Also, he is the son of the reality star, Caroline Manzo.

He was born on 27 May 1986 in Franklin Lakes, New Jersey, the United States. Moreover, his father, mother’s name is Albert Manzo III and Caroline Manzo respectively.

He has a sister Lauren Manzo and a brother Christopher Thomas Manzo.

Albie’s descent is Lebanese-Caucasian. For studies, he went to Fordham University. Also, he was in Seton Hall law school but for a short time period.

Albie Manzo was seen in another reality documentary show titled Manzo’d with Children. This show has only three-season and it was first aired in Oct 2014. The last season was broadcasted in Oct 2016.

Prior to screen appearance, he worked as an event coordinator in a church’s youth group. He is also a real estate agent and began his career in 2015.

Prior, he worked in the restaurant Little Town and also in BLK beverages. He also has his own company named The New Star Group.

He has earned a predicted net worth of $1 million at the current time. The average salary received by him is unknown.

His sister is the owner of a beauty bar, Cafface. Plus his mother has assets worth $12 million.

This reality star is at present keeping himself away from rumors or any desperate scandals.

Regarding Albie Manzo’s body features, his height and his body weight are average. He has light brown-colored eyes and his hair is dark brown.