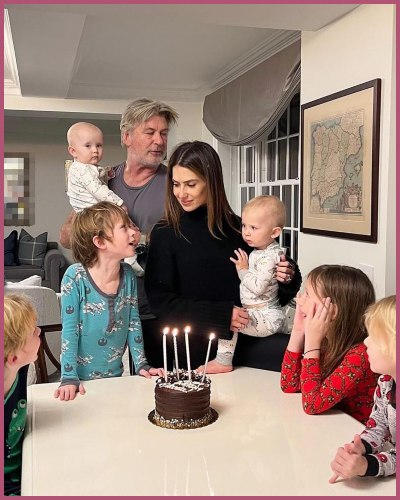 Alec Baldwin thanks his family for saving his life. source: Page Six

Alec Baldwin who recently welcomed his seventh child with his wife Hilaria Baldwin thanked his family for keeping him safe and alive after the accidental shooting on the set of his movie Rust in October 2021.

Along with the series of pictures that he posted, the 30 Rock alum wrote in the caption:

”My heart has been broken a thousand times this past year. And things in my life May never be the same,”

Hinting  that he could face criminal charges following the incident, he added:

”Lots of changes coming. But my family has kept me alive. They are my reason for living. And @hilariabaldwin, too,”

“These kids. All of them born in 212. Same hospital. First four in the same room. Last three in the same, but different room,”

Crew members sued Baldwin for the accidental death of a cinematographer

The proud father then reshared his wife Hilaria’s post announcing the good news that they have decided to name their daughter Catalia Irena.

Hilaria, 38, wrote after giving birth to her seventh child:

”She’s here! We are so excited to introduce you to our tiny dream come true … Both she and I are happy and healthy. Her Baldwinito siblings are spending the day bonding and welcoming her into our home,”

“Much love to you all. We are so happy to celebrate this wonderful news with you.”

Although Alec now shares 7 kids with his now-wife, he is also father to 26-year-old Ireland Baldwin, whom he shares with his ex-wife Kim Basinger.

Hilaria also shared an emotional post in November 2021 citing that it was a hard year for her family.

“sometimes I didn’t think I was gonna make it through.”

“I want you to know how much you have helped me through some pretty dark struggles. Knowing you were there — such comfort.”

Her husband, Alec got into legal trouble after being sued for negligence by crew members of Rust after a member, a cinematographer named Halyna Hutchins died because of a loaded prop gun.

Also, Read How did Halyna Hutchins die? Alec Baldwin responsible for her death!