Talking about her relationship details, Alecia Moore is presently married to her longtime partner, Carey Hart. Hart is a professional motocross racer. Pink proposed Hart in June 2005 at the time of Mammoth Lakes motocross race. The couple then tied the knot in Costa Rica on 7 January 2006.

After some time, Pink announced in February 2008, that they have separated but Hart appeared in her video that was related to their separation. In February 2008, Pink confirmed that she and Hart were back together. Carey also featured alongside Pink in the music video for her song.

The couple announced they were expecting their first child on The Ellen DeGeneres Show in November 2010. They welcomed their first kid as a daughter, Willow Sage. Moreover, the couple welcomed their second child, a son, Jameson Moon in December 2016. 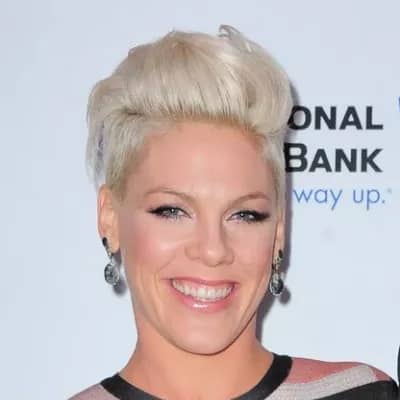 Who is Alecia Moore?

Moreover, she has earned two Billboard Hot 100 top-ten songs named There You Go and Most Girls. Moore’s second album was sold more than 13 million copies worldwide and yielded international number one songs.

Alecia Moore was born on 8 September 1979. At present, she is 42 years young star. Likewise, her birthplace is Doylestown, Pennsylvania, the USA.

Alecia is the daughter of her father, James “Jim” Moore whereas her mother is Judith”Judy” Moore. Moreover, she has a brother named Jason Moore.

Talking about her nationality, Moore holds an American identity whereas her ethnicity is Irish-German, Lithuanian-Jew.

Regarding education, the artist joined Central Bucks High School West in 1997. She joined her first band, middle ground in her high school but it disbanded upon losing a Battle of the Bands competition.

Alecia Moore formed an R&B band named Choice when she was just sixteen years old alongside Chrissy Conway and Stephanie Galligan. The band initially recorded a song, Key to My Heart. She later pursued her solo career and signed a contract with LaFace Records. In 2000, Moore released her first son, There You Go that hit the music stores and became an immense hit.

Her album’s second song, Most Girls ranked number four on the Billboard Hot 100 and topped the music charts in Australia. She even toured with the NSYNC band in there, No Strings Attached Tour. In 2001, Alecia alongside singer, Christina Aguilera, Lil’ Kim, and Mya recorded a cover of the song, Lady Marmalade.

Moreover, Moore, fifth studio album, Funhouse was released in 2008 and the album topped the ARIA chart. The album consisted of other singles like Sober, Please Don’t Leave Me, Bad Influence, and Funhouse.

A famed American star, Moore has earned a handsome amount of money from her profession. She has been active in her profession from the year 1995 till the present.

It is reported that Alecia Moore has an estimated net worth of $200 million as of 2022. She is one of the world’s best-selling artists with more than 90 million records sold worldwide.

For many years, Pink and her partner, Carey’s residence was a large mansion in a gated community in the Point Dume area of Malibu. However, they sold the 8,000 square foot house in 2016 for $12.5 million after buying it in 2010 for $11.85 million.

Later, they shifted to their 200+ acre ranch in the Santa Ynez valley. Alecia and her partner purchased this particular property in 2013 for $12 million. Freshly, in June 2021, Alecia paid $13.7 million for an oceanfront home in Malibu.

Alecia has never been part of any controversial matter or rumors till now. – has been preoccupied with her professional and private life.

It seems that Moore prefers enjoying her personal life and does not want to merge it with her professional life.

42 years young star, Alecia Moore has beautiful looks and an admirable personality. She stands at a height of 5feet 4inches. Also, she has a balanced bodyweight of 54 kg.

Furthermore, Moore has blue eyes whereas her hair is blonde. Her shoe size is 6(US).

Regarding her social media presence, Alecia Moore is an active personality on social media. Alecia has more than 8.7 million followers on her official Instagram account @pink.

Moreover, Moore is also available on Facebook with nearly 31 million fans and supporters.