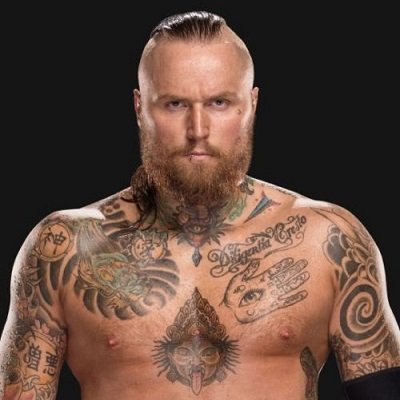 The occult stuff, I grew up having a fascination about world religion and that fascination grew into other religions and other things and I kind of dabbled my way into the occult and started reading about the occult.

I always feel fear, even just in daily life, I feel fear.

I've never had like many friends, I've had a few. It's just something that's in my character, in my personality.

Aleister Black is a married man. He exchanged vows with Zelina Vega. His wife, Zelina is also a professional wrestler. The real name of Zelina is Thea Megan Trinidad.

The wedding took place on the 23rd of November 2018 in a very private event accompanied by their friends and family.

Currently, the lovebirds are leading a happy married life.

Who is Aleister Black?

Dutch Aleister Black is a professional wrestler. He is renowned for his wrestling skills and one of the fierce wrestlers in WWE.

Currently, he is signed with WWE.

Aleister Black was born on the 9th of May 1985 in Amsterdam, Netherlands. His birth name is Tom Budgen.

He is of British-Irish ethnicity. To date, he has not disclosed any details about his father, mother, and siblings.

However, some online sources claimed that he grew up as a child along with his siblings not so well-off family. His father used to work from 5 AM to 4 PM to provide for the basic needs. Later, his father went through a mental breakdown for more than half of a decade.

Details regarding his educational background are not available.

– In 2002, Aleister Black started his journey as a professional wrestler under the ring name, Tommy End.

– In June 2016, he signed WWE, and later, on the 19th of October, he joined to WWE Performance Center. Moving forwards, he made his debut on the 7th of January 2017 with the new ring name, Aleister Black.

– On the 7th of April 2018, he earned the title of NXT Championship at NXT TakeOver: New Orleans defecting Andrade. Later, he showed up at NXT TakeOver: Chicago II where he retained his title as the champion. However, he lost the title to Tommaso Ciampa after retaining the title at 108 days due to the interruption of Johnny Gargano.

– For the title, a three ways match was scheduled among Ciampa, Gargano, and Black at NXT TakeOver: Brooklyn 4. He lost the match after being unconscious from unknown assailants which led him to medical faculty.

– On the 26th of January 2020, he appeared in the Royal Rumble match as the number of 28. In the match, he got knocked out by Seth Rollins.

Through his professional wrestling, he has managed to make a net worth of $3 million that includes his car worth $600k. His basic salary as a wrestler is in the range of $100k.

Apart from that, he also makes TV tapings and house shows that range $500k yearly. Besides that, he also receives bonuses for his TV appearance based on pays views. Also, he receives 10% of the WWE merchandise of Budgen on sale.

There are no rumors about this wrestler. Similarly, he is also not surrounded by any scandals too.

Aleister Black has brown eyes with black hair. His height is 6 feet and weighs around 98 kg.

5 Hollywood celebrities who believe in and practice black magic!