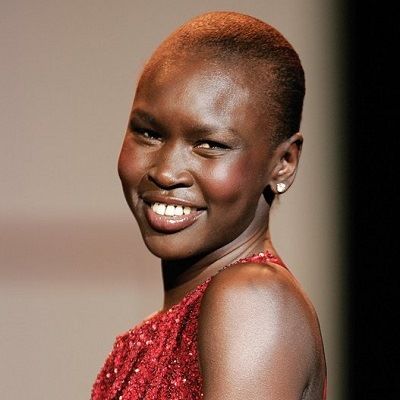 The most beautiful things are not associated with money

they are memories and moments. If you don't celebrate those, they can pass you by.

True beauty is born through our actions and aspirations and in the kindness, we offer to others.

When my friends talk about childhood, I've never heard of any cartoons or TV they remember. The only thing we share is Michael Jackson. That's how far his music traveled - to a remote village on the other side of the world.

What is the relationship of Alek Wek?

Alek Wek started going out with Italian real estate magnate Riccardo Sala in 2003 after reportedly meeting at dinner. After dating for a while, they moved in together and had even bought a house together.

Who is Alek Wek?

Alek Wek is a South Sudanese-British model and designer. Likely, she has been hailed for her influence on the perception of beauty in the fashion industry. In the year 2015, she was listed as one of BBC’s 100 Women.

Her father’s name is Athian Wek (education official) and her mother’s name is Akuol Wek (housewife). During 1985, a civil war broke out in Sudan, which caused the Wek family to flee their now dangerous home.

Eventually, her father died on the journey after an infection broke out in his hip due to a past surgery. In the year 1991, Wek’s family finally arrived in London where Alek had a hard time adjusting to the cold climate.

There is no information about her siblings. Alex holds British- Sudanese citizenship and Sudanese ethnicity. Her birth sign is Aries.

Talking about Alex’s education history, she attended the London College of Fashion.

Talking about her profession, she had her first big break when she appeared in Tina Turner’s music video ‘GoldenEye’. In the following year, she also made an appearance in ‘Got ‘Til It’s Gone’, a music video by Janet Jackson.

In the year 1996, she was signed to Ford Models, a very prestigious agency based out of New York City. In 1997, she was featured on the cover of “Elle” magazine, the first African woman to have this distinction. Then, in 1999, she was photographed for a calendar in which the artist Joanne Gair painted her body in bright, beautiful colors. Likewise, in 2002, she made her acting debut playing a princess of Sudan in the film ‘The Four Feathers’ and starred in a campaign for the Gap.

Additionally, she launched ‘wek1993’ in 2005. It is a line of handbags that are for sale in Selfridges department stores. ‘wek1993’ is dedicated to her father, named after his birth year and designed to look like the briefcases he used to carry. Similarly, in 2007, she released her book entitled ‘Alek’.

Then, she admits that some of her modeling gigs have has racist undertones. Then, she appeared on the cover of ‘Ebony’ magazine with fellow models Tyra Banks and Kimora Lee. In the year 2011, she served as a guest judge on the acclaimed reality show, ‘America’s Next Top Model’, alongside Tyra Banks. Likewise, in 2014, she signed with ‘Marks & Spencer’ for a campaign, a significant milestone for her professionally as well as personally as she used to shop there as a teenager.

She suffered from a skin condition known as psoriasis from birth until the age of 14. It cleared up because of the climate change once she moved to London with her family.

Alek Wek has an estimated net worth of around $20 million as of 2022, and she has earned that sum of money from her professional career. In the year 2014, Alek was featured in the print ad for Marks and Spencer along with Rita Ora, Emma Thompson, Annie Lennox, and Rachel Khoo.

Tags : ‘Got ‘Til It’s Gone’ America's Next Top Model Sudanese-British model and designer.