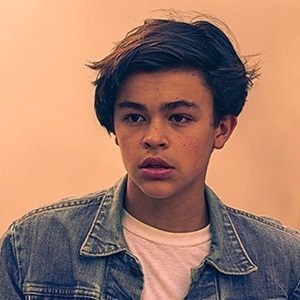 Alessio Scalzotto is currently single. He has not been linked with any other women neither in the past nor in the present. He is currently focussing on his career. Hope, he will find the perfect one very soon.

Who is Alessio Scalzotto?

Alessio Scalzotto a famous Italian born American Instagram star and an actor who is best known for his role of Conrad, which he played on the 2019’s science fiction-adventure film “Rim of the World”.

He was born on 23 October 2002, in Vicenza, Italy and raised in Denver, Colorado. He is currently 16 years old. His mother’s name is Tonia Scalzotto and his father’s name is Giancarlo Scalzotto. He has two sisters and one of the sister’s name is Mia but the name of the other sister is unknown.

His parents are founders and owners of the Scalzotto Italian Restaurant in Broomfield, Colorado. His mother previously worked as the director of franchise development for a virtual office services firm and the COO of Utah-based Image Studios 360.

Alessio when arrived in the U.S., he got involved in theater. It was also a stream of events including joining acting classes, getting a manager and agent, and going to auditions. Scalzotto portrayed a 14-year-old Pablo Picasso in ‘Genius season 2’. Moreover, that was Alessio’s first big production, with the folks at National Geographic even flying him over to Spain to film.

As for now, Alessio Scalzotto is the star of Netflix’s ‘Rim of the World’, which premiered on May 24, alongside talented young actors Jack Gore, Miya Cech, and Benjamin Flores Jr. Though looking at him doing such great things in this young age seems to be easy, he has struggled a lot to reach here.

His big break came only after several unsuccessful auditions. So he suggests the young ones who are thinking of being an actor to be more dedicated and sincere towards their passion. Also, he appeared in the movie ‘Genius’ in 2017.

It seems Alessio has not been awarded and nominated for his work till date.

He has an estimated net worth of around $400k and he has earned that sum of money from his professional career.

Alessio has been successful in keeping himself far from rumors and controversies in his personal and professional life.