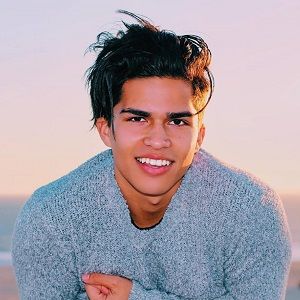 Who is Alex Aiono?

Alex Aiono is an American pop singer as well as a famous YouTuber. He rose to prominence for his singles such as “Doesn’t Get Better” and “Alphabet Soup.”

Currently, he has signed with Interscope Records. So far, his videos on YouTube have earned over 700 million views and has earned more than 5.5 million subscribers.

Talking about his nationality, he is American and his ethnicity is mixed (Samoan, Māori, Danish, English, German, Irish). He has three sisters Taylor, Sidney, and Hallie.

From the beginning of his childhood, he had a keen interest in music and also began to learn various instruments from the very early age.

Alex began his career as a professional singer on March 15, 2013, when he launched his first single titled “Doesn’t Get Better”. In the same year, he released his debut EP Young & Foolish.

As he quoted John Legend his biggest influences, he has also co-written a song in his album. Back in 2016, he also started to make “flipped” versions of popular songs such as Drake’s “One Dance” and Nicky Jam’s “Hasta el Amanecer”.

He rose to prominence for his singles such as “Doesn’t Get Better” and “Alphabet Soup.” Currently, he has signed with Interscope Records.

So far, his videos on YouTube have earned over 700 million views and has earned more than 5.5 million subscribers. Besides singing, he also plays multi instruments including guitar, piano, bass, and drums.

Being a famous singer and YouTuber, he earns a decent amount of money from his profession. However, his salary and net worth are unknown.

It seems he has full focus on his work rather than stuck in any controversial stuff.

Alex has a height of 5 ft 10 inches and his weight is unknown. Moreover, he has a pair of brown eyes and black hair, Besides this, there is not any information regarding his other body measurements.

In addition, he also runs a YouTube channel on which he has earned over 5.5 million subscribers.