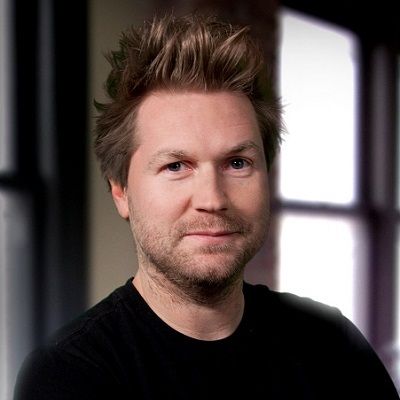 Alex Albrecht wife is Heather Stewart. The couple has been married from 2013 and the relationship of the pair seems to be getting along pretty smoothly with no signs of an imminent split between them. The couple has had no children yet.

Apart from Alex Albrecht wife, he has not been known to have dated anyone.

Who is Alex Albrecht?

Alex Albrecht is one of the renowned Podcast host, Actor, Director, and a Writer. He is the founder and director of the popular, Los Angeles-based comedy, The Misfit Toys. Moreover, he was the co-host of the former G4techTV television Program The Screen Savers.

He was born on August 14, 1976, in Vienna, VA. Albrecht is the son of Dr. Mark Albrecht, former President of ILS. Likewise, her mother’s name is Kathe Hicks Albrecht who is also the past president and director of the Visual Resources Association

Alex has his schooling at Burgundy Farm Country Day School and graduated from American University with a degree in computer science. Moreover, he was a member of the Delta Chi Fraternity. While at college Albrecht was a male cheerleader, with ambitions of becoming a professional mascot.

Albrecht started his career from the RAND Corporation as a programmer and IT person, then as a multimedia programmer in the Science Applications International Corporation. He founded the improv-comedy troupe, The Misfit Toys, a live performance in L.A in 2001. It continued up to 2003. He appeared as a contestant on the game show Russian Roulette and Beat the Geeks in 2002.

Alex was hired to be the co-host of the television technology show, The Screen Savers by G4techTV on September 7, 2004. He joined Revision3 on August 5, 2005. Then he co-hosted Diggnation, which were the videos podcasts, summarized selection of Digg users’ top story selections.

He also co-hosted ‘The Totally Rad Show’ with Dan Trachtenberg and Jeff Cannata as a podcast. It was released on March 7, 2007. He hosted another 8 episodes of a weekly cooking show, ‘Ctrl+Alt+Chicken in 2006. Alex and Rose appeared for an ad, ‘Super Bowl’ in GoDaddy.com also. He appeared in a Domino’s Pizza commercial eating and in a Dell commercial.

On June 17, 2008, Alex launched the Project Lore which is about the popular video game world of Warcraft. In 2009, Alex initiated App Dragon, an iPhone app company which released an app, Duel.  He flew for U.S. Navy Flight Demonstration Squadron in the back seat of Blue Angel, in March 2010. According to Alex’s Twitter account, he founded and directed the short film “Neverland” in July 2010.

Then, he acted as a part role in a comedy group  ‘Hammer Don’t Hurt ‘Em’ directed by Stan Wells and also acted as guest-starred in season 3, episode 4 for an Internet-based live-action parody of The Legend of Zelda known as The Legend of  Neil.  In May 2012, from the Nerdist YouTube Channel; a new show was released known as 4 Points with Alex Albrecht. Alex and Alison Haislip initiated a new podcast known as the ‘Half Hour Hour Happy Hour’ in April 2015.

In The Streamy Awards, 2010, he won The Best Hosted Web Series for Diggnation (2005). Likewise, he has his name in the nomination of  The Best Web Series Host.

The estimated net worth of Alex Albrecht is approximately $ 1,000,000 in 2015. Likewise, it includes his stocks, properties, and luxury goods like yachts, private airplanes, etc.

There is a rumor on the internet that Alex Albrecht is gay. Though it became wrong when he gets married.

Alex Albrecht stands with a height of 5 feet and 11 inches and his weight is unknown. Likewise, he has blond colored hair and blue colored eyes.