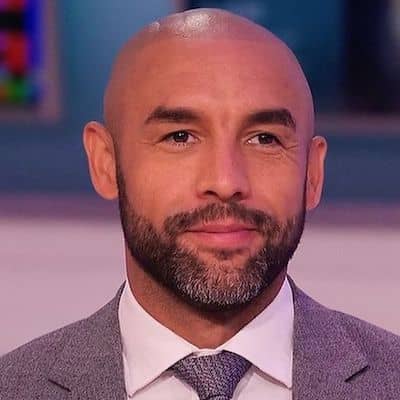 Alex Beresford is currently a married man but he is not living with his wife. He exchanged vows with Natalia Natkaniec but the wedding details are unknown.

They also welcomed their son named Cruz. But this couple disclosed they are living apart in June 2020 and actually they had disunion in 2019.

Alex talked about his feud with Natalia during a podcast, On the Britain Get Talking. He said that they tried to sort things out but they failed. Then at last, from March 2020, he started to live separately.

Who is Alex Beresford?

Alex Beresford is a British musical artist plus an entrepreneur. He is currently working for a British TV network ITV.

In addition, his popularity increases after appearing in a dancing show, Dancing on Ice S10.

He was born as Alexander Isaac Beresford on 17 Oct 1980 in Bristol, England. The name of his father and his mother is unknown to the public.

Alex’s ancestry is English-Guyanese and about his academics, he went to St Thomas More RC School. It is now known as Fairfield High School.

Alex Beresford started to work at ITV West in 2004 in a teleprompter position. In 2005 he was promoted as a weather presenter. He then joined ITV West Country in 2009.

Here he hosted an evening news shoe named The West Country Tonight. The other programs he was seen hosting are Daybreak, Good Morning Britain, The World’s Weirdest Weather, Britain’s Most Extreme Weather, and more.

Apart from hosting, Alex is also an excellent dance which he proved by participating in Dancing on Ice. He competed in its 10th season in 2018.

He was partnered with Brianne Delcourt but unfortunately, he was eliminated and did not win the show.

At present, this TV star has accumulated an estimated net worth of around $500 thousand. His salary from his career is not yet disclosed.

Alex is keeping himself away from rumors plus scandals at present.

Regarding Alex Beresford’s body features, his height and his body weight are average. He has dark brown eyes and dark brown hair but he prefers to keep his head clean shaved.

he has a fit body and posts his amazing physique on social media.

Alex is officially active on social networking sites. His Instagram and Twitter accounts are followed by more than 142k and 254k followers.