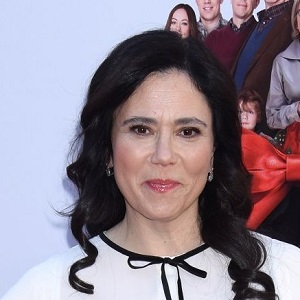 Every comic is really a frustrated rock star

I'm still auditioning and doing other movie parts, but I really like the developing and the writing. You have more control over your destiny

Television and film acting is really fun because you are working with other people and you are not completely responsible for the outcome of the project.

What is the relationship of Alex Borstein?

Alex Borstein is a divorced and single woman at the present time.

She was previously married to the famous actor and writer Jackson Douglas. They first met each other while studying improv at the ACME Comedy Theatre. Douglas proposed to her during the taping of a MADtv skit.

Their divorce was finalized in 2017. Since then, she is living a single life.

Who is Alex Borstein?

Alex Borstein is an American actress, writer, producer, and comedian.

She is best known for performing the voice for the long-running role of Lois Griffin on the animated television series Family Guy.

Borstein was born Alexandrea Borstein on 15 February 1973, in Chicago, Illinois, the USA to Polish Jewish.

She also trained in improv at the ACME Comedy Theater, where she met her writing partner and future husband Jackson Douglas.

Alex began her career working together with Jackson Douglas on the animated series Casper and Pinky and the Brain in the early 1990s.

She shortly left her position at an ad agency where she wrote print ads for Barbie to become a full-time writer.

In 1996, she worked on the show Power Rangers Zeo as the voice of Queen Machina. In 1997, she joined the cast of MADtv and appeared in various characters until 2009.

From 1999 to 2003, she voiced Lois Griffin, Tricia Takanawa, and other several characters in the animated series Family Guy.

Alex returned to Family Guy in 2005. From 2013 to 2015, she appeared in the lead role as Dawn Forchette in Getting On. Since 2011, she appears as Lou Deckner in the series Shameless.

She is also the writer and consulting producer of the series. She recently voiced Edie McVroom in Cars 3 (2017) and appeared as Susie Myerson in the series The Marvelous Mrs. Maisel (2017).

For her work in the series, she was nominated for the Primetime Emmy Award for Outstanding Animated Program in 2008.

She was also nominated for the Primetime Emmy Award for Outstanding Voice-Over Performance in 2013.

Her yearly income is estimated to be $5 million.

Currently, there are no rumors regarding her personal and professional life and she has not been in any controversy yet.

She has a great sense of humor and in the 2019 Emmys, she said in an interview that she wants to take off her pants.

She has a height of 5 feet.

She has black hair color and her eye color is dark brown.