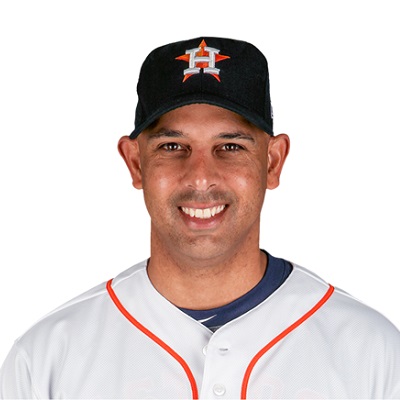 I don't want people to make it seem like it's a great comeback story, i don't want that. I'm actually going to use this bad experience to make people better

I still love what I do and I promise you from now on I'm going to use this experience the right way, i'm not proud of it. I'm not happy about it but we have to move on

It was eye-openingthe last two days, from top to bottom. Right now, theyre a lot better than us.

What is the relationship of Alex Cora?

Alex Cora is in a relationship with Angelica Feliciano. In 2017, Angelica gave birth to twins, Gabriel and Isander Manuel. They have been dating for a long time now.

From his previous marriage with Nilda Cora, he has a daughter Camila Cora. Camila frequently makes an appearance on Alex’s Instagram. Alex and Nilda are not together anymore. Alex has a stepson Jariel.

Who is Alex Cora?

Alex Cora is a Puerto Rican former infielder and manager in Major League Baseball. Alex served as the manager of the Boston Red Sox and led the team to the 2018 World Series championship in his first season.

Alex Cora was born Jose Alexander Cora on 18th October 1975 in Caguas, Puerto Rico. He is the son of Jose Manuel Cora, father and Iris Amaro, mother. He has a brother Joey Cora.

Alex attended University High School. After that, he attended the University of Miami in 1993 and graduated in 1996.

Similarly, he is an inductee of the University of Miami Sports Hall of Fame.

Alex started his playing career by being drafted in the 12th round of the 1993 Major League Baseball draft by the Minnesota Twins. He made Los Angeles Dodgers debut on 7th June 1998.

In the yeat 2006 and 2009, he played for Puerto Rico in World Baseball Classics. Similarly, he was the general manager for the Puerto Rico national baseball team. In 2018, he became Manager of the Red Sox.

On 15th November 2016, he became the bench coach for the Houston Astros. However, on 25th August 2017, he was ejected from a game against the Los Angeles Angels.

Alex served as a manager of the Boston Red sox. He led Red Sox in the 2018 World Series Championship. He became the fifth manager to do so in MLB history.

However, he parted ways with Red Sox due to his scandal.

In 2018, Alex signed a three-year contract with Red Sox for $800,000. He was made the third-lowest paid manager in baseball.

There are rumors that the Red Sox manager Alex will face significant discipline. He was a bench coach for the Astros that season. It is reported that he will draw a similar punishment as suspended Astros general manager Jeff Luhnow and manager AJ Hinch.

Alex has clean shaved head and brown eyes. He is 6 feet tall.