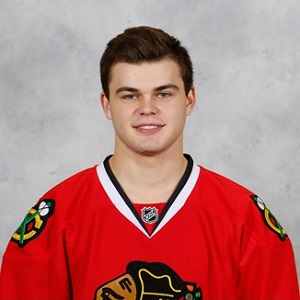 Alex DeBrincat has kept his personal life private and out of the spotlight. He usually doesn’t talk about his private life in media and public. He prefers people focusing on his work rather than his personal life. He hasn’t mentioned about his affairs publically and has managed to keep it low profile. There is no any record of his marriage and divorce till now.

Who is Alex DeBrincat?

Alex DeBrincat is an American ice hockey player. He currently plays with the Erie Otters of the Ontario Hockey League (OHL). DeBrincat was selected with the 39th overall pick in the 2016 NHL Entry Draft by the Chicago Blackhawks.

He has not revealed any information about his childhood life. His educational background has not been disclosed yet. However, according to the sources, he attended Lake Forest Academy. His nationality is American and he is of Native American ethnicity.

Alex began playing ice hockey in 2014. He signed with the Erie Otters of the Ontario Hockey League as a free agent on April 29, 2014. He then joined the club for the 2014–15 season. Alex played his first career OHL game on September 24, 2014. He scored his first goal against the Saginaw Spirit in a 7-1 win.

On November 7, 2014, he scored his first career hat trick in a 5-2 win over the Sarnia Sting. He has won the Emms Family Award as an OHL Rookie of the Year. He was also named the CHL Rookie of the Year. DeBrincat also was named to the OHL First All-Rookie Team and the OHL Second All-Star Team.

In May 2017, he was named the 2016–17 recipient of the Red Tilson Trophy which is awarded to the most outstanding player in the OHL. His salary and net worth are unknown to the media.

He has a height of 5 feet 7 inches with a bodyweight of 75 kg. He has blue-colored eyes and his hair color is dark brown.