Alex James is an English musician, cheesemaker, journalist, and songwriter. He has been married to Claire Neat since April 2003.

Alex James is a married person. He has been married to Claire Neat since April 2003. Claire is a music video producer. The couple welcomed the eldest son named Geronimo on February 16, 2004, twin boys Artemis and Galileo on April 2006, Sable on August 2008, and Beatrix in December 2009. The family is currently living together in Kingham, Oxfordshire.

Previously, he dated girlfriend Justine Andrew but they broke up in 2002. 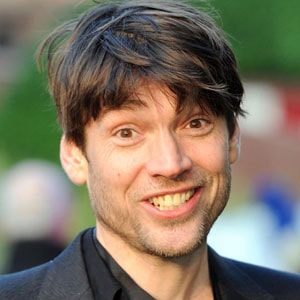 Food is one of life's really great pleasures. My 20th birthday party was all about booze, my 30th birthday was about drugs, and now I realise that my 40s are about food. It's something you appreciate more and more as you get older.

There is a thrill of vulnerability at all airshows. There is no way of making everything completely safe. When the machines are being thrashed to capacity and the pilots are flying at their limits to dazzle, things are bound to go wrong sometimes. There have been some historic disasters, but the danger is a part of the attraction.

The older I get, the more interesting I find lawyers and accountants.

Who is Alex James?

Alex James is an English musician, cheesemaker, journalist, and songwriter who is best known as the bassist of the band ‘Blur’. He has played with temporary bands like Me Me Me, Fat Les, Bad Lieutenant, and WigWam.

He was born on November 21, 1968, in Boscombe, Bournemouth, England. His birth name is Steven Alexander James and he is currently 50 years old. His father’s name is Jason B. James and his mother’s name is Joyce(Tayor).

He was raised by his parents along with her younger sister, Deborah James. He was suggested to take violin classes by his mother but at the age of 13, his father bought a piano and soon gained interest in music.

Alex holds British citizenship and his ethnicity is English.

He attended the state grammar school Bournemouth School for boys and later enrolled at Goldsmiths College to study French.

He started a band titled The Age of Contest when he was in his mid-teens. He made partner Jay Burt-Smale and a few years later, formed another band named Mr. Pangs Bang Bang which was named after his landlord.

During his college life, he met Graham Coxon and invented a group named Nichtkunst. Later, he was introduced to Coxon’s bandmates, Dave Rowntree and Damon Albarn, and later joined in 1989 but lost two other members of the band, Eddie Deedigan, and Dave Brolan. After that, the band changed its name to Seymour. The name was later finalized to Blur and James worked as its bass player.

Then, the band released songs like ‘Leisure’, ‘Modern Life is Rubbish’, etc. In 2002, he left the band and after that, he has not pursued a solo career, unlike his bandmates.

Later, he worked as a food writer for ‘The Sun’, and also he writes for the weekly column Alex James on ‘All Things Food’. He is a regular columnist on ‘The Sunday Telegraph’ called ‘Muskcing In’. In addition, he has written for newspapers like The Observer, The Times, Q Magazine, The Independent, and many more.

In June 2007, he published his autobiography titled ‘Bit of a  Blur’ and later published ‘All Cheeses Great and Small: A Life Less Blurry’ in September 2011. Furthermore, he has worked with actor Demin Hirst, Stephen Duffy, Keith Allen, Jane McDonald, and Gene Loves Jezebel.

He is also a cheesemaker. He changed his 200-acre farmhouse into a cheese farm and now, he is producing award-winning cheese called Good Queen Maude, Blue Monday, Alex James Presents, Farleigh Wallop, and many more.

He has an estimated net worth of around $25 million as of 2022 and he has earned that sum of money from his different professional career.

James replied ‘Circus’ band’s music as shit and the bandmate Damon Albarn was not impressed by James’ attitude and said that James completely pissed him off.

He has a height of 6 ft. 2 inches and weighs 78 kg. Alex has dark brown eyes and black hair.