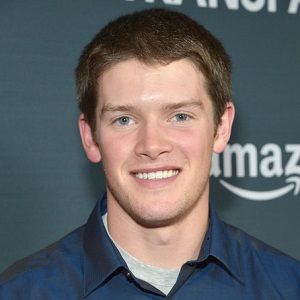 Currently, Alex MacNicol is probably single. Because of his secretive nature, MacNicol has not revealed actual information about his girlfriend or a wife.

He seems to be focused on his career rather than his personal life.

Alex MacNicol is an American actor and producer known for his appearance in the American web television series, Transparent. Further, he has other notable roles in McFarland (2015), and Last Rampage: The Escape of Gary Tison (2017).

Alex MacNicol was born on 8th January 1989 to Caucasian parents. As per his bio, Alex’s zodiac sign is Capricorn. Further, he spent most of his childhood along with his brother and sister in Hunterdon, New Jersey. And his parent’s name is unknown.

He earned a bachelor’s degree in acting and dancing from the DeSales University in 2012 at Center Valley, PA.

Soon after his graduation, MacNicoll made his acting debut from the 2013 Comedy, TV Series, Auditions from Hell. The following year, he appeared in an episode of American television documentary family sitcom, Modern Family.

In 2015, he made his big screen debut from the American sports drama film, McFarland, the USA as Fitz Mitchell. Further, his other movies credit is My All-American, The 5th Wave, My Many Sons, Last Rampage: The Escape of Gary Tison, California No, A-X-L, The Rising Hawk, and Anthem of a Teenage Prophet among others.

From 2014 to 2016, Alex MacNicoll has a recurring role as Colton, Josh and Rita’s biological son in American comedy-drama web television series, Transparent, alongside Melora Hardin, Carrie Brownstein, Kiersey Clemons, and others.

He hasn’t received any awards yet. Though he receives various good comments for his work.

The American actor and producer, Alex MacNicol’s net worth are still under review but some sources predicted it to be over $1 Million. The main source of his earnings is his professional career as an actor and producer. Being active in the entertainment industry since long, Alex has starred in many movies and TV series so his income is speculated to be in a good position.

MacNicoll has concealed the actual amount of salary but as per payscale, the average pay for an Actor/Actress is $80,720 per year. Therefore, Alex also probably earns a salary in the same range. Moreover, there are several upcoming projects of Alex MacNicoll which will surely aid him in earning more income.

She hasn’t been into any rumors and it seems she has maintained a good relationship with all other people.