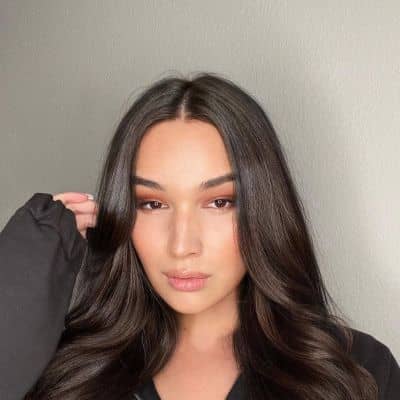 The top model, Alex Mariah Peter has openly stated about her sexuality and she has mentioned she is a transgender woman. Moreover, she is presently single and is not dating anyone at the present.

It seems Alex is presently focused on shaping her career and education. She has not shared any of her relationship of affairs details with the public till now. Peter is very private in nature and hardly confronts the public about her private life.

Who is Alex Mariah Peter?

Alex Mariah Peter is a well-recognized German model and reality TV participant. Peter is widely famed as the winner of the 16th season of Germany’s Next Topmodel in the year 2021.

Moreover, she is the first transsexual winner of Germany’s Next TopModel and has emerged on the cover of Harper’s Bazaar magazine.

Alex Mariah Peter was born on 6 February 1997. At present, her age is 24 years old. Likewise, her birthplace is Germany.

Not much known about her father and mother’s details, Alex has been secretive towards her parents’ details. Moreover, she has not shared her siblings’ details as well in the public till now. Mariah had a stepdad as well. Her parents separated after some years of her birth.

Talking about her nationality, Peter holds a German identity whereas her ethnicity is mixed(Korean, German, SouthAfrican).

Regarding education, the star personality pursues journalism and corporate communication in Cologne.

Professionally, Alex is a student as well as a well-named model. She participated in season 16 of Germany’s Next Top Model. Due to the COVID-19 pandemic, the season was produced in Berlin. GNTM is a German casting show in reality TV format on the station ProSieben.

GNTM has been aired for the first time in 2006 and ever since it has annually organized the event. It is a localized conversion of the American Next Top model. Similarly, the show is controlled by Heidi Klum. Its main aim is to search Germany’s “next top model” among the different beautiful models.

The Top-4 contestant for the final of season 16 GNTM was Alex, Dasha Carriero, Soulin Omar, and Romina Palm. Additionally, Alex stated she is transgender and then encountered few gender reassignment operations at the age of 21. She reserved for Galvan London and Lena Gercke’s fashion label LeGer.

The finale was held on 25 May 2021 and Alex bagged the title-winning 16th season of Germany’s Top Next model. She was awarded a € 100,000 cash prize, a car, and also featured on the cover page in German Harper’s Bazar. Earlier she mentioned in an interview that she wants to make people aware of trans women and transgender.

Peter added being different is much more normal than people admit to themselves. Mariah is the second trans woman to win the Top Model Franchise when it comes to LGBTQ+.

2021 Germany’s Next TopModel winner, Peter has earned a handsome amount of money from her profession and lives a lavish lifestyle.

It is reported that Alex Mariah Peter has an estimated net worth of $500k-$1 million. Similarly, she received a €100,000 cash prize and a car after winning the show.

However, the well-celebrated star has not disclosed her exact salary, earnings, and assets details till now.

Alex has never been part of any controversial matter or rumors till now. Mariah has been preoccupied with her professional as well as private life.

It seems that Peter prefers enjoying her personal life and does not want to merge it with her professional life.

24 years old superstar, Alex Mariah has gorgeous looks, hot shapes, figures, and an admirable personality. She stands at a height of 6 feet.

Furthermore, Peter has brown eyes as well as her hair is brown.