Best known for her role as Mannerjay in the 1993 movie Quest of the Delta Knights.

Alex Martin is a married woman. She walked down the aisle for a businessman and producer Bernard Dean on 15 October 2011 in Las Vegas.

They have married three times and divorced twice with each other and then remarried in 2011. They are living happily and doing well after their last marriage.

This couple together has a son Mason (1998), and a daughter Jerzey (1995). Alex gave birth to her first child Amarah Skye in 1989 with an unidentified man. 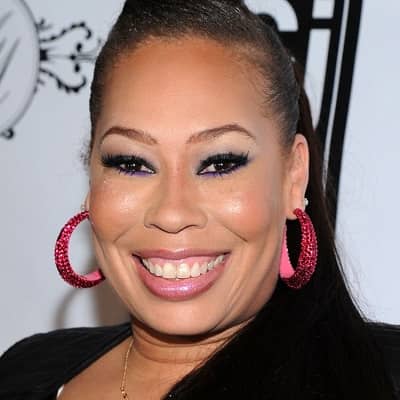 I know what it’s like with the food stamps because my mom has her [Welfare] cards framed.

Who is Alex Martin?

Alex Martin is an American producer and actress. She is best known for her role as Mannerjay in the 1993 movie Quest of the Delta Knights.

This actress was born on 9 May 1973, in the United States with the birth name Alexandrea Martin.

There is no information about her siblings. She attended Holy Cross School. She belongs to All-American descent.

Earlier, in 1985, Alex Martin made her professional debut in the hit movie The Color Purple with her mother. This film starred Danny Glover, Whoopi Goldberg, and Oprah Winfrey. The Color Purple was nominated for 11 Oscars.

Alex played a kid in the 1993 musical comedy film Sister Act 2: Back in the Habit where her mom Whoopi played the main role.

The same year, she played Mannerjay in the fantasy/adventure movie Quest of the Delta Knights. After the gap of a few years, in 1999, Alex starred as Hugh in the satire comedy film American Intellectuals.

Afterward, she starred as a Member of the Congregation in the TV movie Call me Claus. In 2003, she played Maria in Strange as Angels. She didn’t play any in movies and series after this and was busy with her own life and family.

Later, in 2018, Martin guest-starred in the French series Ad Vitam. Earlier, in 1994 at Golden Globe Awards, she was awarded as Miss Golden Globe.

Her mother Whoopi is a renowned actress, author, TV personality, and comedian. She is one of sixteen EGOT in the world to win all four Emmy, Grammy, Academy, and Tony Awards. In 1993, she became the highest-paid actress after her role in Sister Act 2: Back in the Habit.

The salary of this actress is under review. Meanwhile, according to some sources, she has an estimated net worth of $4 million.

There is no rumor about Martin. Meanwhile, she has managed to keep herself out of any controversy. She is doing well in her career.

This actress is 5 feet 11 inches tall and weighs 70 kg. Similarly, she has black hair and dark brown eyes.