Alexa Morgan is an American professional soccer player. She plays as a forward for Tottenham Hotspur.

Alex Morgan is a married woman. She is married to soccer player Servando Carrasco on 31st December 2014. They met at UC Berkeley where they both played soccer.

She and her husband are blessed with a child. Their daughter was born in 2020 and they named her Charlie Elena Carrasco. 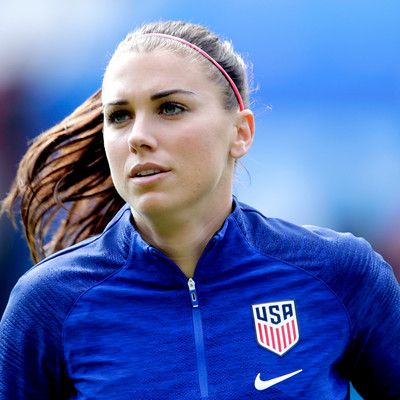 Who is Alex Morgan?

Similarly, she is a forward for Orlando Pride in the National Women’s Soccer League (NWSL) and the United States national team.

Alex Morgan was born on 2nd July 1989 in San Dimas, California. She is the daughter of Michael T. Morgan(father) and Pamela S. Morgan(mother).

Similarly, she belongs to American nationality and her ethnicity is mixed (Welsh, German, and English).

She co-captains her national team alongside Carli Lloyd and Megan Rapinoe since 2018. Likewise, she was drafted number one overall in the 2011 WPS Draft by the Western New York Flash. Similarly, she made her professional debut and helped the team win the league championship.

She was the youngest player on the national team at the 2011 FIFA Women’s World Cup where the team won silver. Similarly, at the 2012 London Olympics, she scored the match-winning goal in the 123rd minute of the semi-final match against Canada.

Likewise, she finished 2012 with 28 goals and 21 assists, joining Mia Hamm as the only American woman to score 20 goals. She collects 20 assists in the same calendar year. She was the sixth and youngest US player to score 20 goals in a single year.

In the year 2013, the inaugural season of the National Women’s Soccer League, Alex Morgan joined the Portland Thorns and helped the team win the league title that year. Likewise, she played for the Thorns through the 2015 season, after which she was traded to the Orlando Pride.

In the year 2015, she was ranked by Time as the top-paid American women’s soccer player largely due to her numerous endorsement deals.  Furthermore, her first acting debut was in Alex & Me, was released in June 2018 where she plays a fictionalized version of herself.

As per the sources, the net worth of Alex is around $3 million. Similarly, her annual salary is around $450,000. From her playing career, she has earned both fame and fortune.

Alex Morgan has a height of 5 feet 7 inches and her weight is around 56 kg. Similarly, she has dark brown color hair and she has blue color eyes.

You may also like to read Jane Campbell, Chioma Ubogagu, and Andi Sullivan.