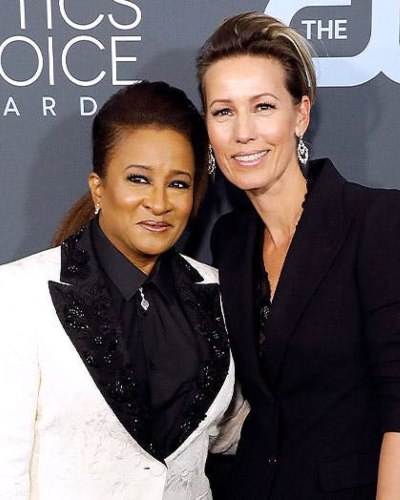 Alex Niedbalski is an interior designer from France. She is the wife of actress Wanda Sykes.

Alex Niedbalski worked as a kitchen designer that is how she got to meet Wanda. In 2006, they attended a party on New York’s Fire Island when Wanda spotted Alex with a computer bag speaking to a little child from a distance. Wanda was attracted to her instantly. A few days later, Wanda’s friend set her up with a countertop seller who happened to be Alex and the rest is history.

They dated for two years before walking down the aisle in 2008. The wedding came a month before Wanda came out as a lesbian while attending a same-sex marriage rally in Las Vegas. A year later, they welcomed fraternal twins Olivia Lou and Lucas Claude on 27th April 2009.

This year they celebrated their 13th wedding anniversary in October. Sykes shared a video of the adorable couple and wrote,

““Do you know what today is….?” Thirteen years ago, we said, “I do.” We married with an election looming with a Prop on the ballot that if passed, would legally negate our marriage. Prop 8 passed…but we knew from our love for each other and the overwhelmingly amount of love from our friends and family that wedding weekend,”

Also read Some of the lesbian relationships of the entertainment industry!

How much is the net worth of Alex Niedbalski?

Alex Niedbalski is an Interior designer so her net worth is estimated to be around $1 million. The net worth of her wife Wanda Sykes is said to be $10 million. She has worked in TV series like Q-Force, The Good Fight, The Upshaws, Tig n’ Seek, The Other Two, Broad City, Vampirina, Black-ish, The Wanda Sykes Show, The New Adventures of Old Christine, Wanda at Large, and more.

Likewise, her film work includes The One and Only Dick Gregory, Breaking News in Yuba County, The Wedding Year, A Bad Moms Christmas, Snatched, License to Wed, and many others.

Wanda Sykes is an American actress, comedian, and writer who is best known for her performances in The New Adventures of Old Christine, The Chris Rock Show, and Curb Your Enthusiasm. Read more bio…

Kelly McCreary and Pete Chatmon couldn’t have the birth of first baby as per their plan!
Tags : Actress Comedian